The Lesser of Two Evils

CIBC World Markets and RBC Capital Markets will soon cease to publish their bond indices which will be replaced by the new S&P/TSX Canadian Bond Index. Users of the defunct indices will have the choice of using the new S&P index or revert to the “Mother of all Canadian Bond Indices”, the Scotia Capital Universe Bond Index. Pricing and credit ratings are important to bond managers. We believe the pricing advantage of the new S&P index, which uses two price sources, is outweighed by the disadvantage of its over reliance on S&P credit ratings. Given the propensity of S&P to downgrade, the recent GM downgrade being a fine example, the composition and performance of the corporate portion of new S&P index could be quite affected by split rated credits. As a corporate bond manager, this is a major issue for Canso. We are recommending that our clients move from our existing benchmarks, the RBC CM Bond indices, to the Scotia Capital Universe Bond indices.

Earlier this year, Standard & Poor’s announced the launch of its new bond index in Canada, the S&P/TSX Canadian Bond Index. It became operational on April 1, 2005, using pricing from both CIBC World Markets and RBC Capital Markets. Historical data has been created back to December 1989 using blended data from these two price providers. Both the CIBC World Markets and RBC Capital Markets indices will cease to exist April 1, 2006.

At Canso, we have used the RBC CM Bond Indices since they did not include bank capital securities which are practically and legally preferred shares. Like the SC Universe indices, the new S&P index takes the politically and “financial institutionally” correct route of including them. Given that the RBC indices will cease to exist, this has left us with the choice between the lesser of two evils.

We undertook an analysis of the new S&P index versus the SC Universe index to determine which index is more suitable for our purposes. The key features are outlined in the following table: 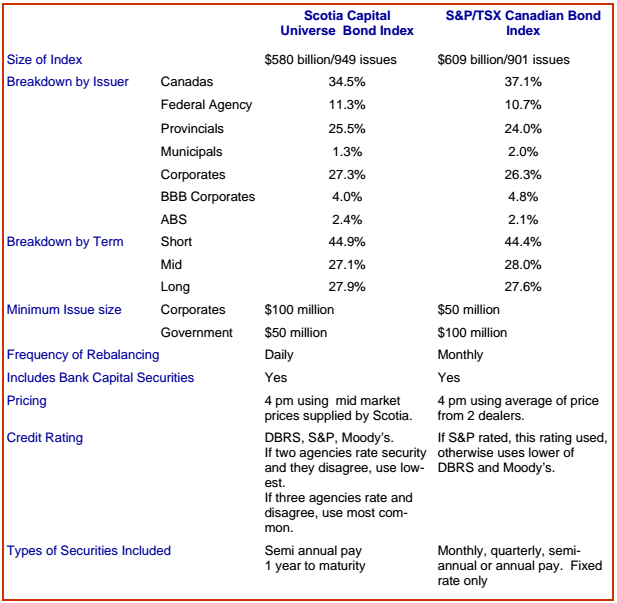 There are few differences between the two indices from a term and credit structure perspective. Both indices include bank capital securities, and the corporate bond component is very similar. There are some minor differences such as the classification of OMERS debt as corporate debt in the S&P index versus Ontario debt in the SC Universe index, but this is not major. Of greater interest is the pricing used to value the index as well as the index methodology used.

The S&P index is superior from a pricing perspective. The current use of two pricing sources, and the intention to increase the number of pricing sources going forward, gives better and more reliable bond pricing. If this were the only key difference between the two indices, we would favour the S&P index.

We think the S&P index is disadvantaged by its over reliance on S&P ratings. If there is an S&P credit rating for a bond, it will be the only one used to determine the rating of a bond in the index. No other published credit rating will be taken into account by the S&P/TSX Canadian Bond Index. If there is no S&P rating, the lowest rating of Investor Services (Moody’s) and Dominion Bond Rating Service (DBRS) ratings will be used. The SC Universe Bond Indices use the lowest rating available if there are only two ratings and the most common rating where there are three. Neither index takes the Fitch rating into account.

The treatment of issuers with different credit ratings has always been problematic for sponsors of bond indices. Rating agencies have different ratings philosophies, methods and analyst biases. In our opinion, S&P tends to be more “numbers oriented” than the more subjective Moody’s. Reputation and “behavioural finance” factors often lead to major biases in ratings. After substantial criticism of the rating agencies for the Enron fiasco, S&P responded by a wholesale downgrade of the utilities industry which now seemed much more risky to their analysts.

In Canada, DBRS is the only remaining domestic bond rating service since the purchase of the Canadian Bond Rating Service (CBRS) by S&P in the fall of 2000. Typically, both Canadian services had “made in Canada” ratings which were higher than the ratings of the large international rating services. After the purchase of CBRS by S&P, the CBRS ratings were “harmonized” to S&P’s global rating scale which led to downgrade of many issuers by nearly a full rating grade. Since DBRS ratings of corporate issuers tend to be higher than Moody’s and S&P, there is considerable potential for differences in rating treatment between the SC Universe and S&P indices.

Many Canadian pension sponsors still exclusively use DBRS ratings in their investment policy statements for credit rating constraints. The S&P index reliance solely on S&P ratings means that their index is not as representative of the Canadian market and will lead to greater benchmark error.

On a final note, while there is historical data for the new S&P index, until the end of 2003 this is merely a weighted average of the prices in the RBC-CM and CIBC Wood Gundy indices. Only in 2004 is the S&P methodology used to determine index values. The Scotia Capital Universe has an actual history dating back to 1979.

The new S&P Bond Index is a welcome enhancement to Canadian bond information. Unfortunately, its over reliance on one credit rating agency and lack of a true historical track record are serious limitations which outweigh its pricing advantage.

Canadian Inflation and the Prospects for Real Return Bonds