2016 started with a bust and ended with a boom in the financial markets.

Fear was dominant in early 2016. The financial media was full of doom and gloom. Talk of negative interest rates and the impotency of monetary policy were the financial fashion. In February the veritable towel was thrown in as investors capitulated and completely gave up hope. That was the contrarian sign of the start of a major rally in risk assets.

The real surprise for 2016 was the sharp post-election equity rally in November after the election of Donald Trump. Certainly, anyone with the foresight to predict a Trump victory would probably have positioned for falling stock prices, once again showing the perils of top down macroeconomic and political forecasting.

The U.S. S&P 500 Equity Index ended the year up a strong 12% in (USD) after being down substantially in February. The commodity heavy S&P/TSX Composite Index was up an even stronger 21.1% for the year after a very negative start to the year. The equity world outside North America showed a more modest 1% return on the MCSI EAFE in (USD), tempered by a strong U.S. dollar and weaker European and Emerging Market equities.

Corporate bonds also did well as credit spreads narrowed in sympathy with equity strength. High yield bonds were the stars, more than reversing their 2015 losses with a rally in energy bonds after the lows for oil prices in February. The U.S. BAML HY Index was up 17.5% in 2016 with the 16.9% of the Canadian FTSE TMX High Yield Index not far behind.

Yield Times, They Are a Changing…

Since Bob Dylan received the Nobel Prize in Literature in 2016, we couldn’t resist paraphrasing him on the bond market. Yield times were definitely a-changing in 2016. We have been saying for several years that we believed bond yields were bottoming and the bond market finally agreed with us in 2016.

As the following chart of 10 Year Canada and U.S. T-Bond yields shows, 2016 saw increased bond yields, although the path was first to lower yields. The year actually opened with plunging bond yields and collapsing risk markets after the U.S. Federal Reserve had finally increased interest rates in December 2015.

Bond yields, commodities and risk asset prices all saw their lows in February. Yields then increased in anticipation of a Fed tightening but collapsed in July due to fears of financial instability after the Brexit vote in the U.K.

Lows for the Ages?

The 10 Year U.S. Treasury post Brexit panic yield of 1.37% on July 7th was lower than its 1.41% yield in July 2012 during the depths of the Euro Debt Crisis. The 10 Year Canada bond actually broke 1% in July with a low yield of .95%, which could be our generational low. Bond yields then began to rise in the U.S. and moved sharply higher after the election of Donald Trump. Part of this was fears of Trump’s expansionary fiscal platform and the Republican tax cutting agenda that both threaten much higher deficits and robust U.S. Treasury bond issuance. It also reflected the end of the flight to bond safety trade. Why hide out in bonds when you can make money in the stock market? 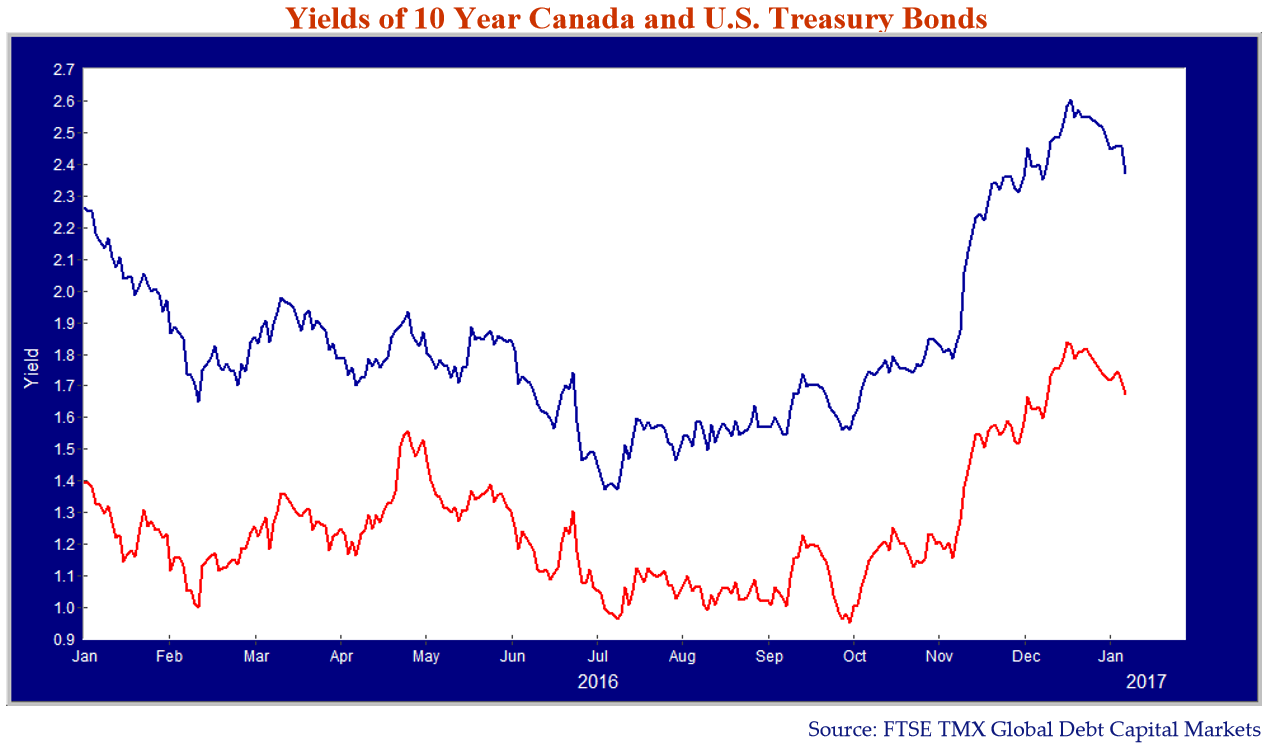 The icing on the increased yield cake was the much-telegraphed Fed interest rate hike from .25% to .5% that finally happened in December. The whole generation of bond managers who grew up in the eight years after the Credit Crisis learned that the Fed could actually have the gumption to raise rates, despite their dreams of lower rates forever.

Canada had a mind of its own on yields, which moved lower in Canada on perceptions of a weak Canadian economy after the summer, retesting the record low of .95% in October. Canadian yields then moved sharply higher in sympathy with rising U.S. yields in November and December. The 10 Year Canada ended the year at 1.7%, up .3% from the 1.4% at December 31, 2015.

We look at 2017 for once without major conviction. We think it will be a reasonable year for the financial markets, a respite from the macro-driven hysteria of the past few years. The stock market whimper from Brexit and the “Trump Bump” rally show that the fear trade imprinted on investors’ brains after the Credit Crisis is finally fading with time.

The U.S. economy continues to improve and is in reasonable shape, despite the visceral economic anger that fueled Mr. Trump’s victory. Mr. Trump and his new team of economic advisors, heavily weighted to Wall Street and billionaires, seem to be telegraphing a roll back of his most extreme promises. His fervent base seems to be forgiving of this, considering his most radical promises to represent rhetorical campaign flourish. It remains to be seen how Mr. Trump’s penchant for disruptive and radical policy statements will translate into action. Trump supporters voted for change in Washington but many of them also voted for Obama’s promised change.

While the Republicans in Congress were a roadblock to many of the Obama administration’s economic proposals, especially fiscal stimulus, Mr. Trump’s popularity and adept self-promotion will likely allow him to follow through on much of his economic platform. Many of Mr. Trump’s proposals, especially lower corporate taxes, are good for equity valuations but worry the bond market. His plan to add fiscal stimulus to an economy that is already in good shape with his infrastructure program and tax cuts is a concern for the bond market. His anti-import rhetoric will lead to higher prices if it becomes trade policy reality. Both of these proposals will increase real yields and inflation. This is not good for a bond market used to the idea of low growth and low interest rates as the “new normal”.

Despite the Fed rate increase in December, monetary policy remains loose globally. Change is in the air, however, with economic improvement and a lessening of the fears of financial catastrophe. The roll back of quantitative easing bond buying has already started and looks to continue. After a long period of searching for any reason not to raise interest rates, central bankers now are looking with trepidation at the prospect that they will finally have to. We think that the Fed and other central banks will be cautious in their monetary tightening and will prefer higher inflation to slowing their economies.

We still believe we are seeing a secular bottom in bond yields. Yields are still very low in a historical context. We have updated our comparison below of long-term Treasury yields, comparing the 40 years from 1920 to 1960 with the current period starting in 1990. The rationale for the two start dates is that they were just after a period of massive defense expenditures in the First World War and the Cold War that were then diverted to civilian production. The blue line is the 12-month moving average of the monthly yields from 1920 to 1960. The solid red line is the 12-month moving average of the monthly long Treasury yields with the thin red line the actual daily yields. The parallel is obviously not exact but it provides an interesting historical context. Our current experience still seems to be tracking our Grandparents’ yields during the Depression. 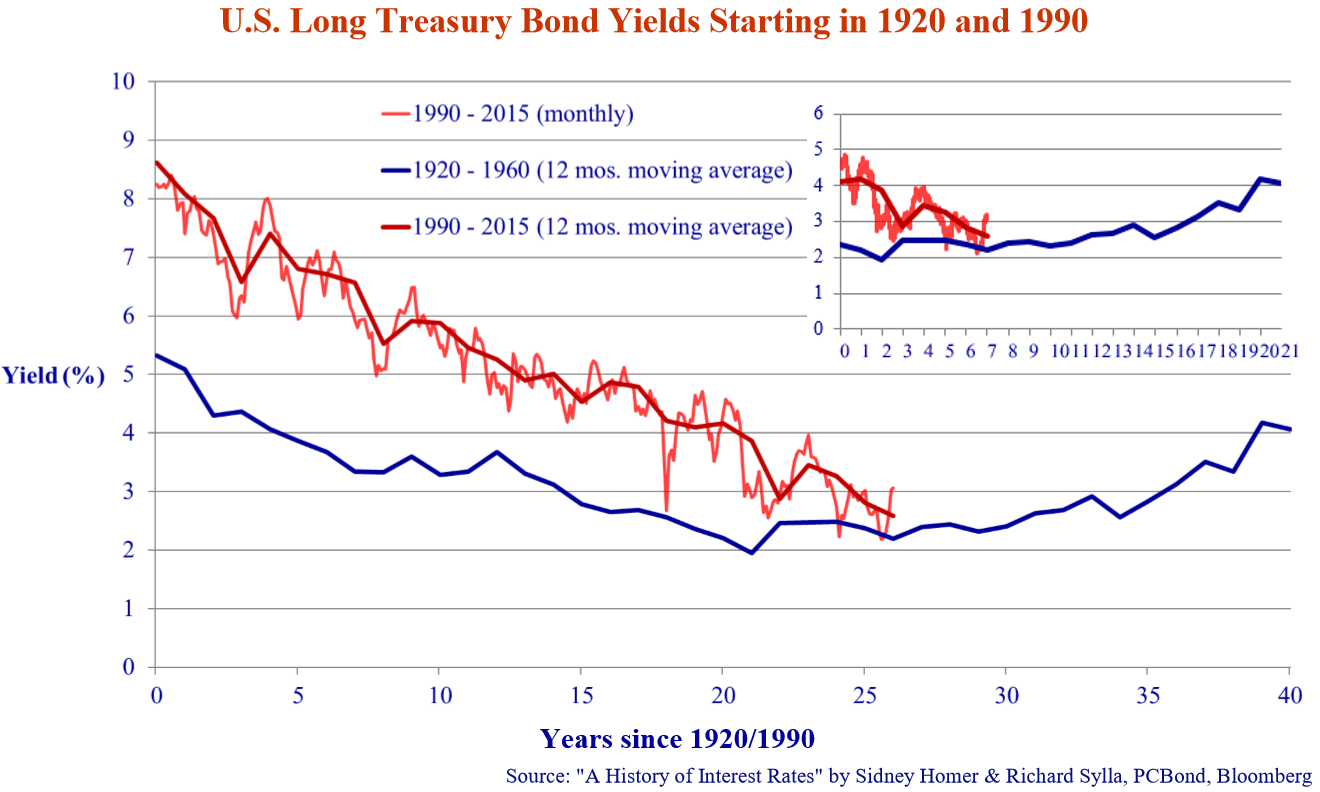 The inset on the previous chart shows in greater detail the recent path of long T-Bond yields, particularly the double dip in 2016 down towards 2% and the levels of the Great Depression. We still seem to be tracing out the bottom for yields much like during the Great Depression.

The Problem with ETF’s

The bond market saw rising Canada and T-Bond yields in 2016 but most investors were spared from an annual negative return by the rally in bond prices at year-end. One thing that worries us is the prospect for the bond markets when investors recognize that rising interest rates are not good for bond performance. Current bond yields will lead to quite modest performance without any capital gains from falling interest rates. Showing our age, we remember the 1994 bond market when returns were quite negative to the shock of retail and even many institutional investors. There won’t be many retail investors buying bonds after a period of negative returns. With the increasing investment in indexed bond ETFs, we worry that withdrawals will be pro-cyclical and lead to further withdrawals. Quantitative easing has seen massive bond buying by central banks that now looks to be ending, which again suggests higher yields.

We are also worried about the speculative excess in the credit markets. It is currently very hard to have financial problems with the strong new issue market but this could change dramatically. ETFs could also be a problem for the bank loan and high yield markets if the current inflows turn to outflows. We have witnessed a further weakening of bank loan and high yield bond creditworthiness and structure in recent deals. Indexed ETFs have to buy no matter what the fundamentals of an issue and underwriters are more interested in pleasing issuers than protecting the investor. The financing gusher in the bank loan and high yield markets could very quickly ebb if the fickle retail investor stops buying ETFs. We doubt many banks will be there to “catch the falling knife” if an issuer has problems or withdrawals cause forced selling.

Overall, we think things should be a bit quieter in the financial markets in 2017. Markets are adjusting to “Regime Change” in the United States, both politically and in monetary policy, as they should. Reality is usually better than the worst predictions and this seems to be the case for the U.S. For those of us who still care about fundamentals, there is still some money to be made on special situations, although it is getting harder to find cheap securities. At Canso, we are still in our period of improving overall portfolio quality, as our existing positions are called or mature and we replace them with higher quality securities. This sets up our portfolios for the inevitable next buying opportunity.

As always we appreciate your interest in and support of Canso. Sign up to LinkedIn and Twitter to stay on top of Canso’s latest market comments.