What a Long, Strange Trip It’s Been

Greece dominated headlines in the first half of 2015. Its flip-flopping on its way to capitulating on austerity measures kept the EU in turmoil. Concerns over slowing growth in China sent its stock market tumbling and global markets swooning in August. The Chinese government then used heavy-handed tactics to stem the losses which only seemed to make things worse. On the political front, a kinder, gentler and very liberal Justin Trudeau won the top job in Canada in a surprise election win over conservative Stephen Harper. The U.S. went the other way with Donald Trump shocking and awing his way to the lead in the U.S. Republican Presidential primary campaign. The terrorist attack in Paris added further turmoil and fear to an already jittery global economic and political picture.

The Bank of Canada surprised markets by cutting rates 25bps in each of January and July. Across the Atlantic the European Central Bank put its Quantitative Easing programme into overdrive. After putting off the inevitable for as long as possible in December, the U.S. Federal Reserve raised interest rates 25bps to 0.50% – the first rate increase in over 9 years. The Fed also indicated a series of meas- ured rate hikes in 2016 was likely. 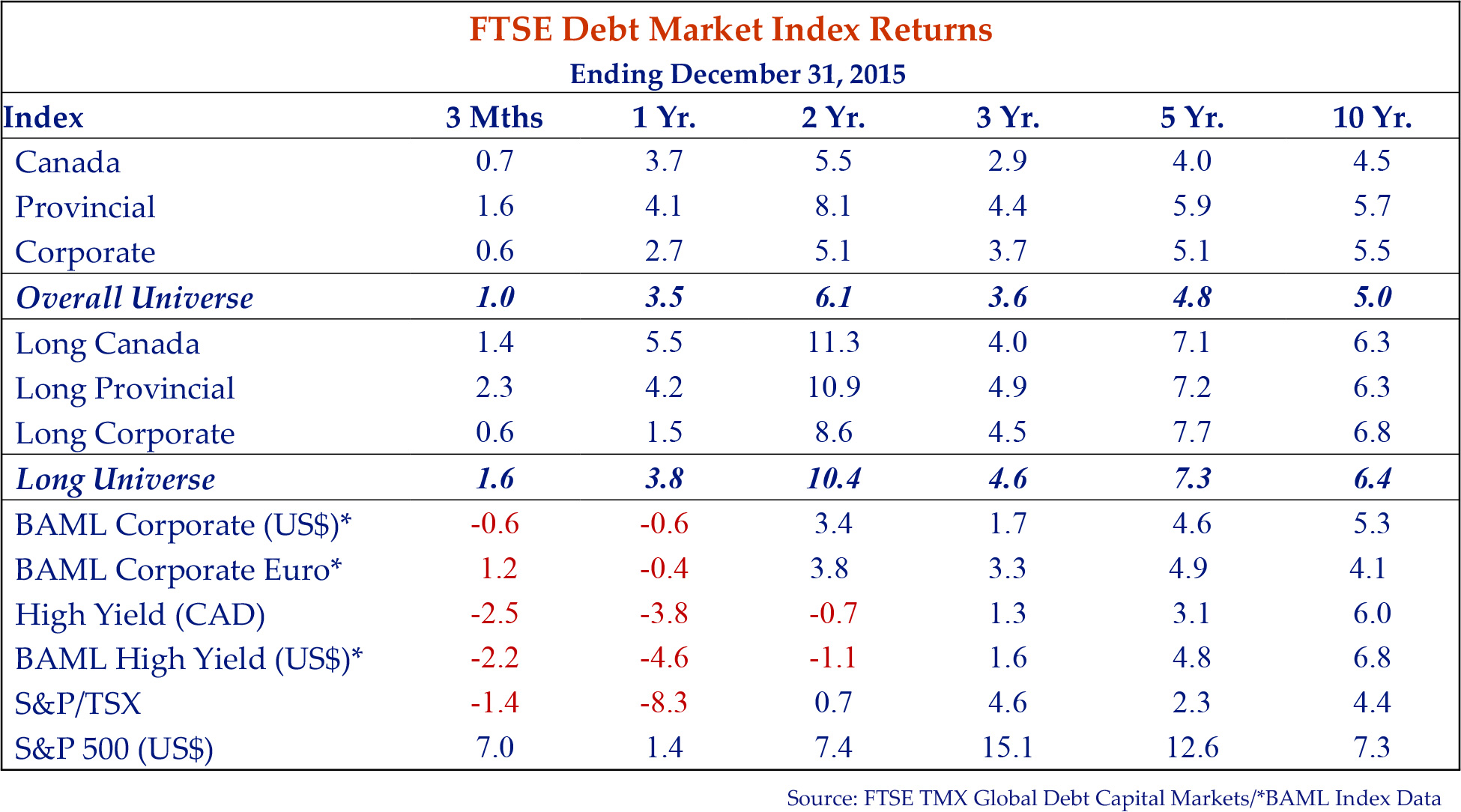 Canadian fixed income investors were again paid for “playing it safe”. Canada and Provincial bonds outperformed as spread widening in credit product impacted Corporate bonds. The FTSE TMX Corporate Index returned 0.6% and 2.7% for the 3 and 12 months ended December 31st well behind the Provincial Index at 1.6% and 4.1% respectively over the same period. Lower credit quality saw poorer returns as the Canadian High Yield Market fell -2.5% and -3.8% for the 3 and 12 months ended December 31st respectively. The Canadian Equity markets took it on the chin as the resource laden S&P/TSX fell -1.4% and -8.3% over the last 3 and 12 months. In contrast the S&P 500 rebounded over the last 3 months posting a stellar 7.0% bringing its 12 months return to positive territory at 1.4%.

In Case You Missed It

Look down at the graph below and then all the way over to the right – see that little vertical line? That line has been the source of an intense, acrimonious, multi-year and multi-continental debate. On December 16th the U.S. Federal Reserve raised interest rates 25bps – the first increase in over 9 years. The Fed indicated future rate increases in 25bps increments are likely during 2016. If the Fed follows through, the targeted Fed Funds rate will reach 1.50% by the end of 2016 – a level last seen October 28, 2008 in the teeth of the Credit Crisis.

We have been of the view for a considerable period the Fed was justified in raising rates based on the relatively strong performance of the U.S. economy. We expect the Fed to follow through with a series of measured rate increases in 2016.

We have suggested for some time and repeat again that the Canadian economic miracle touted by politicians in the aftermath of the Credit Crisis was less miracle and more mirage. There appears to be more and more evidence suggesting at least some of the demand in Canada’s residential real estate mar- ket has been artificially created – dubious income reporting and illegal cash flows from overseas sources are two possible culprits. We worry that Canada is in a real estate bubble that seems apparent to all but Ottawa’s regulators.

That said, we continue to marvel at the relative position of the Canadian yield curve versus the U.S. curve. The recent fall in oil and other resource prices exposed Canada’s commodity dependence. Despite a fall in the Canadian dollar the manufacturing sector of central Canada is sputtering, not humming. Canadian non-administered interest rates remain well below U.S. levels. This is not usually the case in a commodity bust when they move well above U.S. yields. 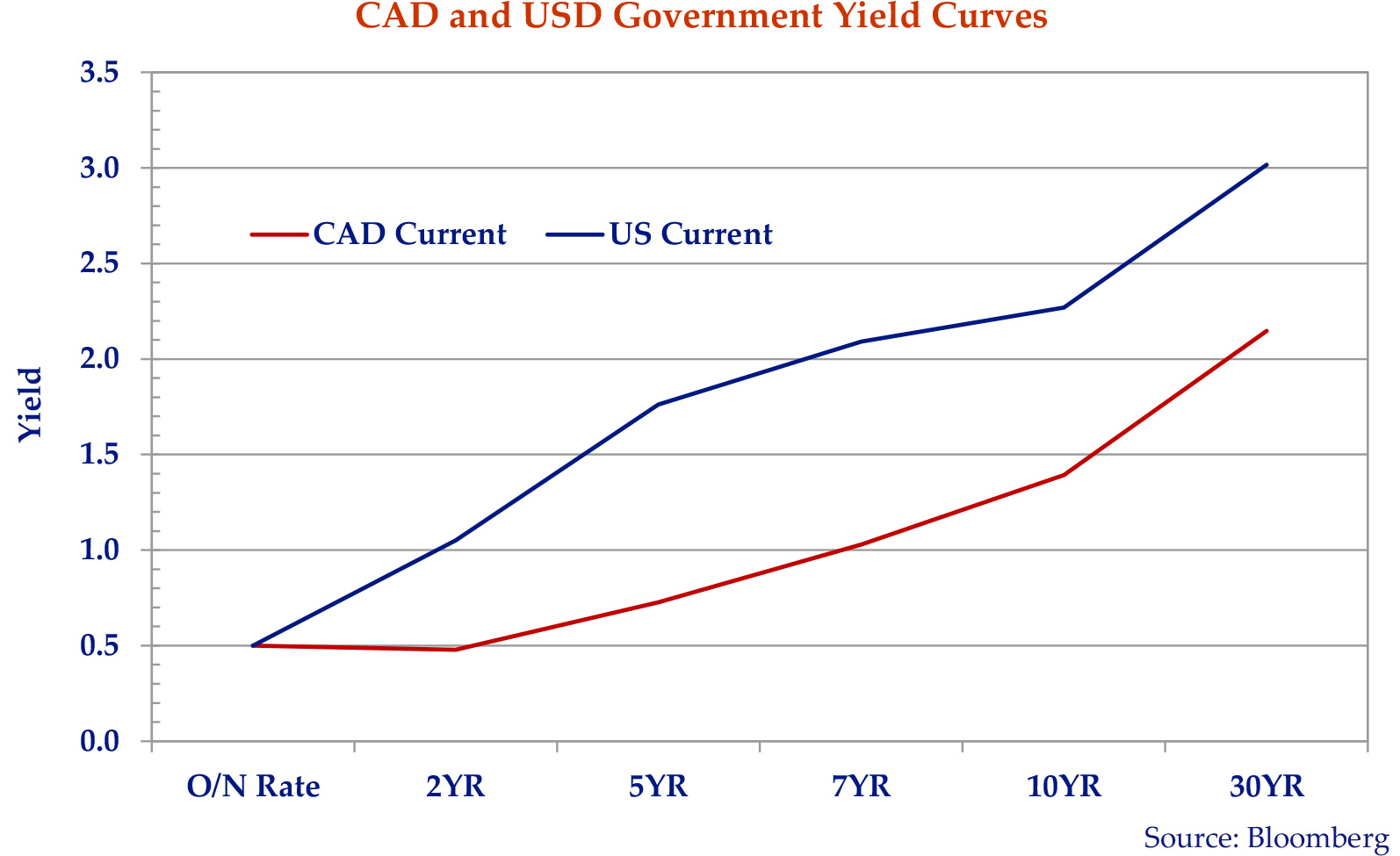 We believe when investors revisit the Canadian story they may be less than impressed with substantial deficits in Alberta and Ontario and soon at the federal level, one of the election promises of the Trudeau Liberal government. An overheated residential real estate market, stretched consumer finances and less than a stellar manufacturing sector add to the evidence that the “Canadian Economic Miracle” is over. The chart below shows the relative position of the Canadian and US yield curves in 1994, where Canadian yields were well above the U.S. across the yield curve.

We acknowledge up front that 1994 was a somewhat unique year in the fixed income markets. What was evident in 1994 was international investors’ concern over Canada’s credit situation. Rating agencies downgraded Canada’s debt from AAA and large structural deficits were of major concern. Yields on Government of Canada bonds were rightly higher than the U.S. for credit reasons. 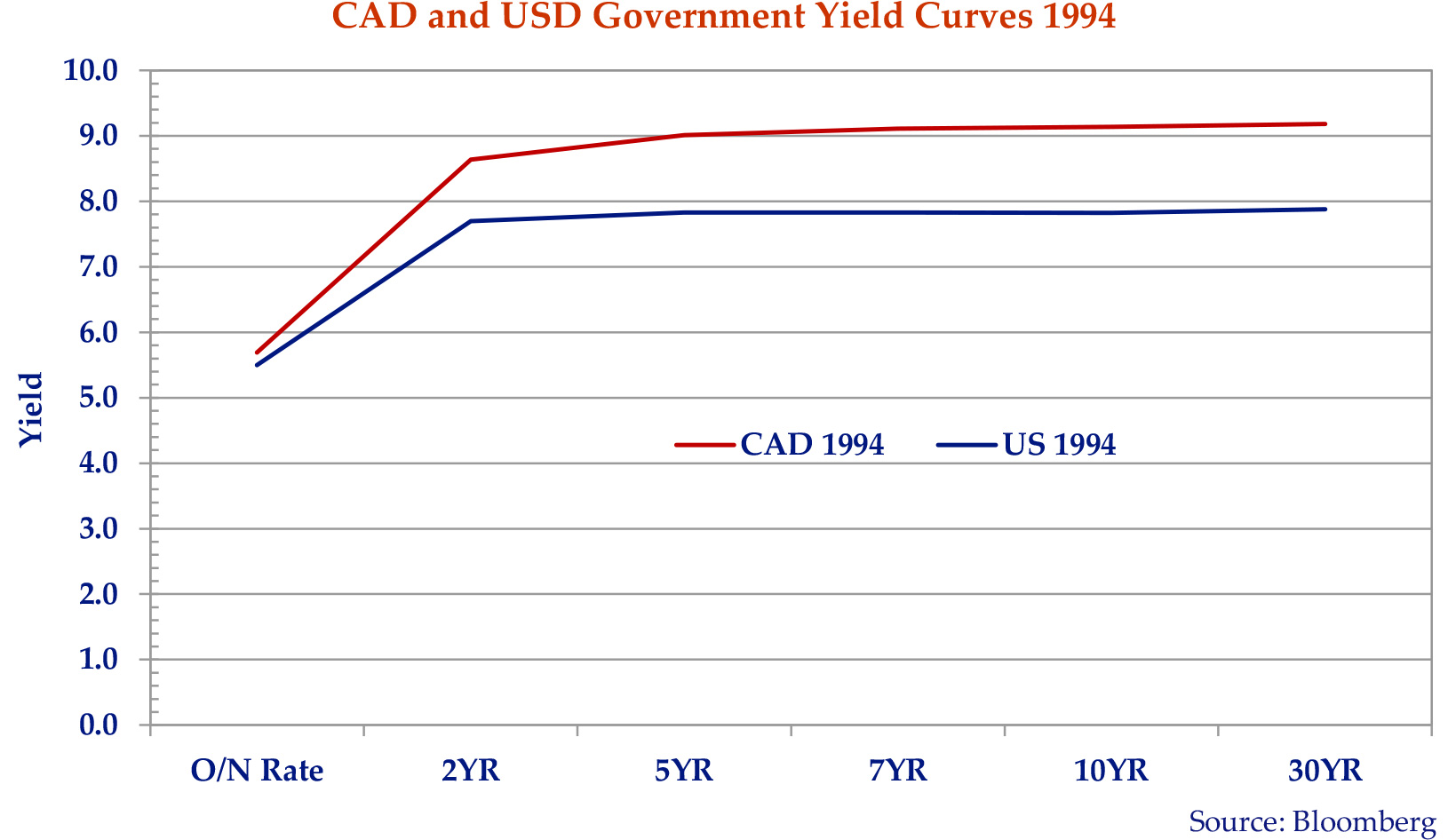 We are not suggesting Canada’s credit situation is as dire as it was in 1994, however, we contrast economic weakness in Canada and large structural deficits in Alberta and Ontario versus strength in the U.S. indicating higher yields in Canada are warranted. All of that could add up to international selling of Canadian federal and provincial government securities putting upward pressure on Canadian government yields and further downward pressure on the Canadian dollar.

The Bank of Canada dropped overnight rates 50bps in 2015 which caused substantial volatility in the Canadian bond market. Trading throughout the yield curve was active. Although rates ended the year lower than where they started, the range was dramatic – 65 bps between the Max and Min yields on 30 year Canada bonds – 75bps in 5 year Canada bonds.

A detailed breakdown by different credit quality parameters in Canada and the U.S. is provided in the table below. 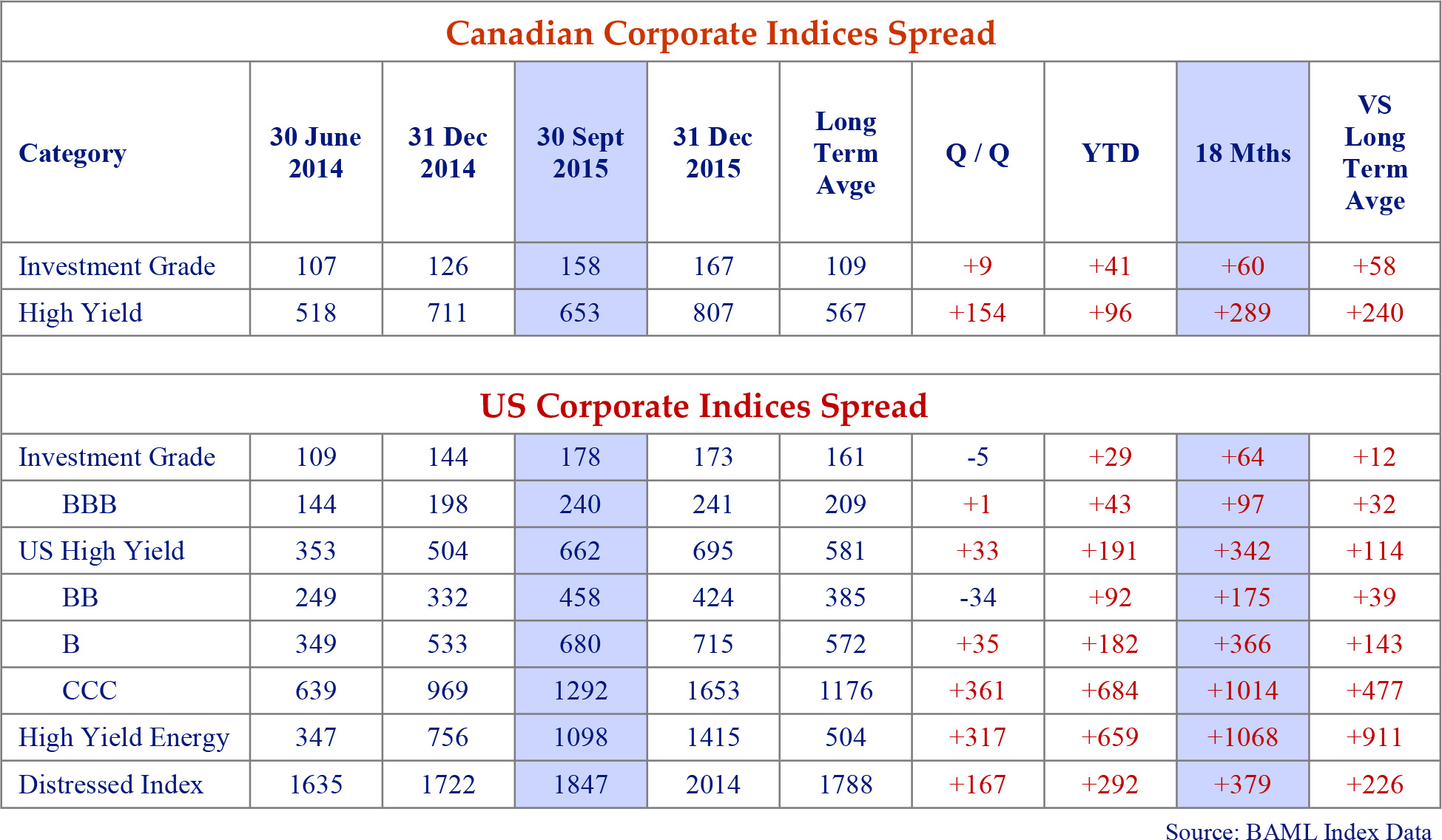 The table clearly illustrates that challenging financial markets have caused the risk premium demanded by investors to increase. The lower the rating category the larger the increase in risk premium. The High Yield Energy Index finished the year +659bps wider to where it started the year and +1068bps wider than June 2014. Spread widening across geographies and rating categories has created some opportunities within both the investment grade and high yield universe.

Followers of Canso know we spend a significant amount of time and resources analyzing the downside risk of any investment opportunity. As a lender we want to ensure we understand our rights and remedies in the event things do not go as planned. The ability to enforce security is a critical element of our risk analysis and feeds directly into our Maximum Loss calculation.

In fact our Maximum Loss methodology only works if we fully comprehend our rights as lenders and can enforce those rights in the event of a default in order to realize value for our investors. As a direct consequence, while Canso evaluates investment opportunities around the globe, we only invest when we believe the rule of law is present and actionable if our investment does not go as planned.

The perils of doing business in jurisdictions without the rule of law or where laws appear to be en- forced arbitrarily is highlighted in Bill Browder’s recent book Red Notice. The book documents the rise, fall and tragic human consequences of Mr. Browder’s investing career in Russia and his subsequent and ongoing fight for justice. We recommend this book – particularly for those contemplating investments in Russia.

Default rates are rising. Anybody can buy high coupon bonds and generate a decent running yield when defaults are low. In a more difficult credit environment managing downside risk is key. Spreads in the credit markets tend towards the lowest during periods with the lowest defaults and the highest during periods of high defaults. Investors also throw caution to the wind when credit funds have strong inflows and portfolio managers “get invested” for marketing reasons. Canso’s large and experienced credit team and Maximum Loss methodology allow us to invest with conviction throughout the credit cycle and to buy securities others are avoiding and to avoid securities others are clamoring for.

It is nearly impossible to pick up a financial newspaper without reading an article on bond market liquidity and transparency. Implicit in all of the articles and arguments on the topic is that before the implementation of the Volker Rule and Dodd Frank the bond market was flush with liquidity. Benevolent and well intentioned investment dealers utilized the capital for the benefit of investors in the bond mar- kets by stepping in fearlessly when a buyer could not be immediately matched with a seller and vice versa.

The reality could not be further from the truth. Any investor who lived through the Russian debt crisis and Long Term Capital in 1998, the dot-com bubble in 2000, the Credit Crisis in 2008 and the Euro debt crisis in 2011 (first edition) understands that there was no liquidity in those periods when markets needed them most. Our experience suggests during times of stress and duress investment dealers with bloated inventories of credit products make for poor counterparties.

At Canso, as a bottom up fundamental security selection firm, we believe the financial markets are inefficient. We also believe it is virtually impossible to consistently pick market tops and bottoms. We have a basket of securities we like. If the market decides to sell something we like, we endeavour to buy it at the cheapest price possible. In periods of market fatigue and outright panic, we opportunistically invest in mispriced securities. We prefer our counterparties act as intermediaries, not investors.

Lower government bond yields, a weaker Canadian dollar and wider credit spreads summarize 2015’s credit market activity. As we enter 2016 we remind ourselves and our investors we are neither market-timers nor prognosticators. Our experience and instinct suggests bond yields will move higher, the Canadian dollar is closer to a bottom than it has been and wider credit spreads provide select opportunities.

As in any market opportunities present themselves and in difficult markets we believe we do some of our best work. Canso continues to work through our relative value bottom up security selection process and will opportunistically add to positions when we believe we are compensated for the risks.

Our bottom up fundamental approach gives us the confidence to invest in securities others avoid and to avoid securities others are clamoring for. If the markets stumble regardless of the reason, we at Canso would expect to opportunistically pick up cheaply priced assets on behalf of our clients once again.

As always we appreciate your interest in and support of Canso.
Sign up to LinkedIn and Twitter to stay on top of Canso’s latest market comments.