The potential end to “quantitative easing” hit the global bond market hard in the middle quarters of 2013. Yields soared in the bond market, as the chart below shows. The 30 Year U.S. Treasury yield as shown below increased from 2.8% on May 2nd to 3.5% on June 30th . The increase in yields continued through the summer and fall. The yield hit 3.9% before closing the quarter at 3.7%, up another .2%.

Shocked and Awed in the Bond Market

Investors were shocked from their complacency by the thought that monetary manna would no longer fall from the Fed heavens. The reaction was violent and awed investors. As the chart on the next page shows, long Government of Canada bonds plunged in price also as yields gapped upwards.

A closer look at the same chart shows that the Canada 5% of 2037 bounced between $115 and $120 from 2007 to 2010, except when yields dropped and its price rose to $130 in the Credit Crisis. In the Euro Debt crisis and the resulting quantitative easing by the Fed, this bond peaked at over $150. Since it has become apparent that the U.S. economy has improved and the need for “emergency measures” might be fading, it has fallen back to $130. We think its price will continue to pre-crisis levels, as our dashed line indicates.

Granted this is a long-term bond but the overall bond market has also experienced negative returns over the past few months since yields have started to rise. Those involved day-to-day in the bond market know that rising yields lead to falling bond prices. This is not necessarily the case for the average investor. We have had to explain many times over the course of our careers, even to the occasional VP Finance, why an increase in interest rates was not good for a client’s portfolio. Perhaps the biggest problem is that “yield” and “return” are often confused by the uninitiated. This leads to shock and anger when bonds fall in value. 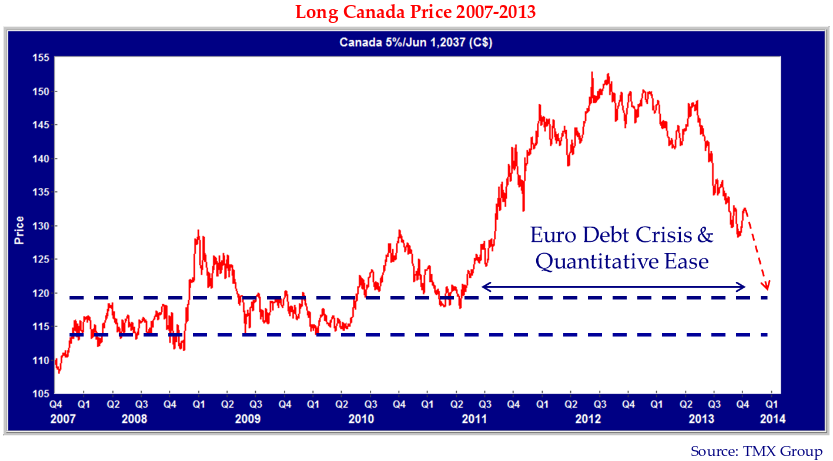 The “safety” status of a fixed income investment has begun to be questioned by amateurs and professionals alike. A whole new generation of investors is now learning the lesson that bonds can fall in price. In the table on the following page, we have tallied the returns ending September 30th , 2013 for a variety of stock and bond indices. A funny thing happened on the way to a “safe portfolio”. Note that previously “safe” bonds have negative returns in both Canada and the U.S. over the last 9 months. The “safest” Canadian government bonds have returned -2.1% compared to their “riskier” corporate cousins at a flat -.1%.

The “risky” equity markets that investors had shunned after the Credit Crisis have had very strong returns. The U.S. S&P 500 stock index is up 19.3% year-over-year and even the resource heavy Canadian S&P TSX is up 7.1%. As investors look at their September 30th statements, they will be wondering why they are so heavily weighted in underperforming bonds and not in strong performing stocks.

Unfortunately for their financial advisors, clients will have conveniently forgotten that they had demanded this in 2009 after the drubbing their equities took in the Credit Crisis. A client recently asked us what we thought would be the next financial “crisis”, perhaps expecting us to comment on the U.S. budget battle or a looming banking problem. Taken aback, since we don’t tend to fixate on macro issues, we told him that it wouldn’t be a conventional political or financial crisis since everyone expects one. It would be shock at the reversal of the ultra low yield environment and the resulting significant losses for bond portfolios.

You might think that this is a pretty negative view of bonds for a bond manager to be promoting. Fortunately for our clients, we demand to be compensated for the risk we assume for their portfolios. Whether it is credit risk or interest rate risk, we analyze it, price it and then position our portfolios accordingly. We had the luxury of positioning our portfolios before yields began to increase.

Other investors are only very recently waking up to the fact that yields are on the rise. We ran into a very experienced and knowledgeable investment advisor recently who had a distinct aversion to bond mutual funds. “Remember 1994”, he said. “All my clients in bond funds were mad as H@#@$% that they lost money”. He went on to explain how difficult it was to explain bond fund losses to clients. He also said that it is much more palatable to explain a loss on an actual bond. If it has fallen in value, he can point out that they will get their money back at maturity and still be paid interest along the way.

This crusty old investment advisor (nearly as old as your Canso correspondents) had a very good point. For the purposes of our investment discussion, we think it germane to consider what happened in 1994. Setting the scene, recall that the stock market had plunged in 1987 due to computer trading. Sound familiar? To prevent the financial panic from spreading, Alan Greenspan and the U.S. Federal Reserve then flooded the markets with cash in the first of his financial market rescues. Sound even more familiar??

Markets responded to the monetary stimulus and things normalized, at least until monetary policy began to be tightened in 1994. Greenspan announced the normalization of monetary policy and then proceeded to raise the Fed Funds rate. Then the “stuff hit the fan”. Easy money had done what it always does; makes people stupid with their investments. Bond market yields rose and cracks started to appear in the previously happy financial markets. Mexico and Orange County defaulted on their debts.

This time around, we have Professor Bernanke at the controls of monetary policy. His anti-crisis fighting now includes his innovative “quantitative easing”. What is very interesting to us, as students of the monetary and credit cycle, is that the good professor did not really do anything except suggest that at some point, if things got back to “normal” economically, he would stop his bond buying ways. This very obvious observation (great alliteration) was enough to send yields up and bond prices down. Professor Bernanke sure didn’t “put his money where his mouth was”. The Federal Reserve has continued to create money with abandon. It is buying the same amount of U.S. Treasury bonds, funded with electronically minted cash into the Treasury accounts. They also left the Fed Funds rate at almost zero.

The reaction of the bond market is fascinating. As we have pointed out many times in our recent newsletters, we believe the post Euro Debt Crisis low yields were historical aberrations. Proving the human psychological tendency that the recent past is our most convincing guide for the future, investors had impounded these as their best estimate of the future.

We considered the extraordinarily low yields with wonder, if not stupefaction. There were explanations aplenty to justify why things would stay as they were. Economists and strategists are employed to explain things they don’t understand and can’t possibly forecast out more than a quarter or two. They gave confident predictions that interest rates would stay low forever. We were not so sure. These were the very same “experts” in 2010 who had believed that interest rates would surely rise. The market consensus exists to give comfort to those who seek its safety.

The reaction to the current rise in bond yields and the fall in prices can be explained by using the “Stages of Grief” of psychologist Elisabeth Kubler-Ross. She divided the grieving following a personal loss into five stages: Denial, Anger, Bargaining, Depression and Acceptance.

The Stages of Bond Grief

The initial reaction of the market was Denial: “Yields shouldn’t rise because of…” We then got into Anger: “This is stupid, there is no reason for this rise in rates…” Bargaining is obvious to a portfolio manager, we call it window dressing: “Although your portfolio is down, we have protected the portfolio against further loss by shortening term…”

No Fancy Macroeconomics and Models

We believed some time ago that yields were extraordinarily low on a historical basis. Two years ago, in our October 2011 Corporate Bond Letter, we made the point that there was little compensation in government bond yields:

“Income Safety is Not Government Bonds.

Right now, those portfolio managers heavily weighted in government bonds are no doubt telling their clients how defensive their portfolios are. The clients should be asking the important question of what they will do next. With the DEX Canada Index yielding 1.6%, there is a lot of bad news built into the prices of government bonds. There also isn’t much income available to investors.” Canso Corporate Bond Letter, October 2011

Without a lot of fancy macroeconomics and mathematical models, it seemed to us that 1.6% for a portfolio of Canadian government bonds when the Bank of Canada was targeting 2% inflation was not a great deal. In November 2011 we began to sell many of the long-term issues that we owned. We had made a lot of money on the narrowing of credit spreads since the Credit Crisis, and the drop in yields during the Euro Debt Crisis was astounding to us.

We invested the proceeds of our sales of long issues into floating rate notes that, as our clients and readers know, we believed to be extraordinarily cheap. As consensus investors rushed to lock in long yields for fear of a further fall in yields, we did precisely the opposite. Not considering ourselves particularly smart or capable at economic forecasting, we turned to history for our guide. History told us that real and nominal bond yields were exceptionally low and that floating rate assets were particularly attractive. We discussed this in our April 2012 Corporate Bond Newsletter:

“We also think that buying floating rate bonds at similar or better cash yields to fixed rate bonds will be a winning strategy if interest rates return to more normal levels compared to inflation.”

So what are we thinking now? Well, we expect yields to continue rising to more normal levels. We also think that that the “crisis watch” fervor of the consensus investor is fading. “Time heals” even old investment wounds. Investors fleeing from the downside they had encountered in equities bid up the prices of “safe” bonds to ridiculous levels, competing with Ben Bernanke and the Federal Reserve to buy Treasury bonds. Now that these investors are experiencing the downside of bonds, we think they might be reconsidering their investment options.

As time passes and bonds remain under pressure, we think some of the massive shifts of investors into bonds over the last few years will reverse. Mutual fund surveys show this is happening and the beneficiary is Balanced Funds. Eventually, investment flows will shift into equities as market timers play “catch up”.