Inflation as a Radical Concept

We find this a curious phenomenon. The economy continues strong and inflation is in a gently rising pattern. This seem s to be a radical concept in today’s bond market, but the evidence is indisputable. The chart below shows year over year change in the monthly Canadian Consumer Price Index (blue line) since 1990. Despite the prevailing notion that inflation is gone for good, the trend is gently upwards. To confirm this, we have calculated the 36 month moving average (red line) which definitely confirms the trend line that we have plotted. 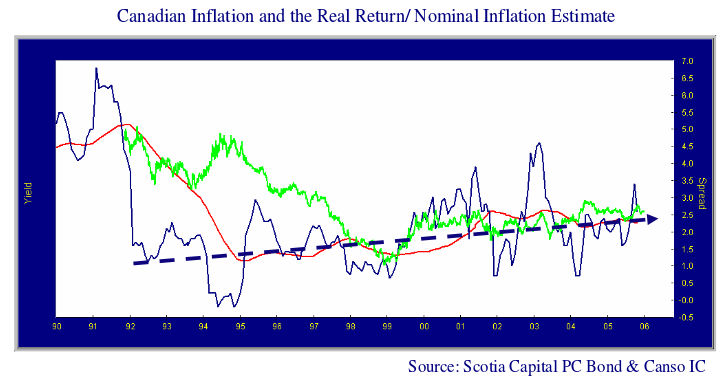 The most persuasive confirmation of the rising trend in inflation comes from the bond market itself. We turn to the difference between inflation-linked and nominal yields to discover the “market’s opinion”. We have calculated the difference since 1991 between the Canada 4.25% Real Return Bond that matures in 2021 and its conventional and “nominal” equivalent, the Canada 9.75% of 2021. The “breakeven spread” between nominal and RRB yields should approximate the maximum inflation that the market forecasts for the holding period until the bonds maturity in 2021. This is shown by the green line in the graph above.

The Breakdown in the Breakeven Spread

The year-over-year CPI and the moving average CPI have been moving up steadily since the lows in 1995. The RRB breakeven yield moved down to the same level as the CPI in 1999 and has moved fairly similarly since then. The chart suggests that bond investors overestimated inflation considerably until 1998. After this, the RRB/ Nominal breakeven spread tracks the moving average CPI fairly well. This means the bond market is effectively confirming the gentle rise of inflation.

We believe that the prevailing current low yield environment is a result of loose monetary policy rather than low inflation expectations. The money supply growth has been far in excess of that necessary to fund economic growth. This has resulted in very low risk premiums on bonds as investors have strived to maximize their nominal income in the face of ultra-low interest rates. Inflation risk premiums in particular are very low. A 2021 Canadian Real Return Bond has a real yield of 1.5% which combines with 2.6% CPI for a 4.1% total yield. This is the same as the 4.1% yield on the nominal 2021 Canada bond issue. This means that investors are happy to receive no inflation risk premium on nominal bonds or implies no value to the inflation insurance of RRBs. This inflation complacency risks a shock if investors recognize the generally increasing inflation levels.

Economically, we think the strength in the world economy should continue over the year ahead. Even though current monetary policy is restrictive in the United States and some other countries, it is going to take some time to remove the huge monetary stimulus that was provided from 2001 to 2004. This pump-primed money supply growth has caused an amazing credit expansion. Its effects are seen in the prevailing level of very low long-term yields and the extremely narrow yield spreads on corporate bonds and loans.

This has made the assumption of risk very inexpensive for investors and borrowers. Lenders are anything but cautious. As short-term interest rates have risen, lenders seem almost frantic at the prospect of their loan growth slowing. This loan starvation hasn’t caused them to lend against artwork purchased in shopping mall parking lots but it is causing them to find new ways to judge credit to permit further lending to ever more levered borrowers

The U.S. housing market is a fine example. Mortgage brokers and mortgage security underwriters have met the falling demand for fixed rate mortgage loans with a substantial increase in mortgage “innovation”. Sub-prime loans are substantially growing as a part of mortgage lender’s books. Interest only and reverse amortization mortgages have also grown in market share as intermediaries struggle to keep up their mortgage production volume in the face of the weakening finances of borrowers. It has taken direct action by regulators in the U.S. to slow the growth of some of the more aggressive mortgage structures, particularly those employing negative amortization.

Thanks to the new “stricter” BIS credit standards and the low risk weight attached to residential mortgages, mortgages and mortgage securities are now at historical highs in the loan books of the major U.S. banks. This exposes the credit markets in general to a setback in the credit or pricing of mortgages. We believe that the issue of the hedging of mortgage prepayments will continue to plague this huge area of the U.S. capital markets and has the potential to cause a major financial crisis should long-term interest rates rise further.

We think that short-term interest rates will rise over 2006, as the underlying strength of the world economy becomes apparent and inflation continues at the 2-3% level. We don’t, however, expect central bankers to engineer excessively high short-term interest rates in the next year. We base this on our observation that it has been difficult enough for them to “normalize” interest rates to barely positive levels after inflation. Overshooting on the high side is far less likely than a premature end to the rate hike campaign. The political pressure in the United States, Canada and Europe seems to be much more in the reflation camp than towards low inflation. Given the political problems in Washington and the war in Iraq, we think that a “little bit” of inflation is much more acceptable in the new millennium than recession and economic pain.

Gone are the days of strict monetarism and its longing for steady money supply growth. The new paradigm for central bankers is to be the engineer of the money supply locomotive which powers the economy. The central banker’s grip must be firm on the steam valve, ready to open full when actual or perceived problems rise on the economic tracks ahead.

Our problem with the “new new” role of the modern central banker is the potential for excess. It is always more economically fun to be growing rather than groaning under higher interest rates. The propensity of economic tinkering is to err on the side of easier rather than tighter monetary policy. The manipulating and fine-tuning central bankers of the 1960s and 1970s were retrospectively disparaged for their efforts after the economic denouement of the 1980s inflation. They would be very comfortable with the implicit job description of today’s Fed Chair: “Pump first! Ask the questions later!”

The change in the leadership of the U.S. Federal Reserve is fascinating to us. Alan Greenspan’s replacement, Ben Bernanke, is an expert on the policy errors of the Great Depression of the 1930s. His infamous musing about dropping money from helicopters to combat deflation was unfortunate and the source of his market moniker “Helicopter Ben”. While one comment does not necessarily foreshadow Mr. Bernanke’s effectiveness as the Fed Chair, it certainly suggests that inflation-fighting credibility was not the key determinant in his appointment by the President.

Given the prevailing low level of longer term interest rates and the propensity to pump money popular among policy makers, the question of interest rate movement in the year ahead depends on one’s outlook for inflation. The bond market has already voted for lower inflation. We are not as sure.

Up, Up and Away for Wages

To us, one of the most potent portents of inflation is the direction of wage increases. This is undeniably upwards in both Canada and the United States. Wage gains have been running at close to 3% for some time. This surprises most investors, who have been habituated to the “you get nothing” or zero wage increase period of the 1990s. In the period where senior management became obscenely enriched by all manner of pay and perks, it was the lot of the 1990s low level worker to accept their meager due and be happy to still have a job!

In our new millennium, things have not been so classist or easy on the wage front. It helps that aging and retiring Baby Boomers have left employment for Florida in droves, leaving their younger colleagues to soldier on in a low unemployment environment. This has led to increasing wage settlements overall. Granted there are industries in distress, but overall things have not been this good on the wage front for many years. With an expanding money supply, employers have the revenues and the ability to pay up to attract and retain employees. As Graham Dodd, national practice director for Watson Wyatt Canada’s Human Capital Group said: “As the economy continues to improve and the competition for high-performing individuals intensifies, employers will face increasing pressure to raise salaries at a faster rate to attract and retain talented employees.” (hrreporter.com Sep 14, 2005)

The average wage increase from the Canadian HR Reporter’s full salary survey of the various 2005 compensation surveys was 3.4%. Anecdotally, this agrees with our general read of wage inflation.

The most recent confirmation of our wage view was the settlement of the recent strike at the Mont Tremblant ski resort. To quote the Globe and Mail: “The labour agreement, based on recommendations by a Quebec government conciliator, calls for a five-year contract with wage hikes totalling 16 per cent, improvements in vacation allowance and the creation of a pension fund in the third year”( GAM January 7, 2006). A five year deal for 16% is just comfortably above our 3% wage increase forecast. Since inflation and wage growth tend to track each other very closely, this is another confirmation that inflation seems to be moving in 3% range, plus or minus 1%.

The bond market consensus is very cavalier about the danger of higher levels of inflation, focusing more on the bullish prospects of the flattening yield curve. Long term bonds need a sharp drop in inflation to justify their current level. If it becomes apparent that inflation will stay near its current level, long-term bond prices could fall substantially.