Watching Larry Kudlow recently on CNBC, we had the rather strange feeling that he was the spokesperson on some sort of infomercial for lower interest rates. One of his guests had just made a rather reasonable argument on interest rates, one that we have made in the past. Nominal economic growth was running somewhere around 8%, the guest said, and it was likely to stay at this level. The only question to be resolved was how much would be inflation and how much would be so-called “real growth”. In the current strong growth and high commodity price environment, the guest felt that inflation was likely to move higher. This would lead to higher interest rates as the Fed “normalized” monetary policy.

At this point, Larry quickly turned to his other guest for a more optimistic read of the economic tea leaves. In what a lawyer might call “leading the witness”, Larry reamed off many statistics and acronyms which he felt were germane to the discussion. “What’s wrong with high real growth?” he asked huffily. To paraphrase: “If the thing-a-ma-doodle and the watch-a-ma-call-it combine with the low PCE ex everything that looks bad, why shouldn’t interest rates be low and the stock market be higher!”

That Larry, who was an economist of some repute earlier in his career, finds it necessary to disparage those who have a more measured view of the financial markets is not our point. We wonder why the prospect of higher interest rates is so threatening to the political and economic “conservatives” that they can’t abide any serious discussion of the subject. The political right has triumphed electorally in the United States by staying “on message”. Now the economic right seems to be attempting the same thing.

The target of this message seems to be Alan Greenspan, the Chairman of the Federal Reserve. Propaganda aside, how likely is it that Mr. Greenspan will be swayed from his higher rate course? It is not too likely in our view. The following chart shows “real” U.S. long term interest rates over the term of Mr. Greenspan as Fed Chairman. A quick inspection shows that long term “real” interest rates have only one way to go, and that is upwards. Long term real interest rates were above 6% when Mr. Greenspan became the Fed’s Chairman in 1987. Since then, they have generally stayed in a band of 1% either side of the mean of 3.6%. The current level of 1.6% is the low! 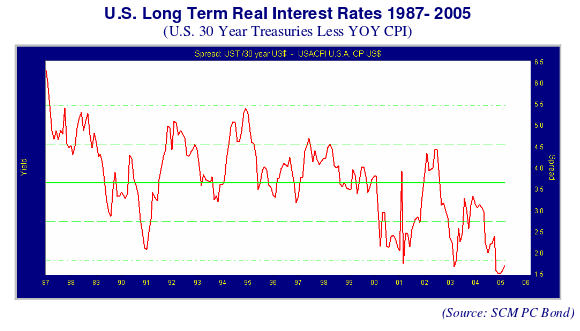 We could conceivably get higher real interest rates by having long term yields drop and inflation drop more. This is not too likely, as shown by the following graph. Inflation is now at the level which seems to cause Mr. Greenspan concern, and it does not look poised to drop. This would suggest to us that we are likely to have higher inflation and interest rates ahead as the Fed and its Chairman try to “stay ahead of inflation”. This is disturbing to the financially entrenched interests that have been major beneficiaries of the low interest rates engendered by Mr. Greenspan during his gallant career as a financial crisis fighter. 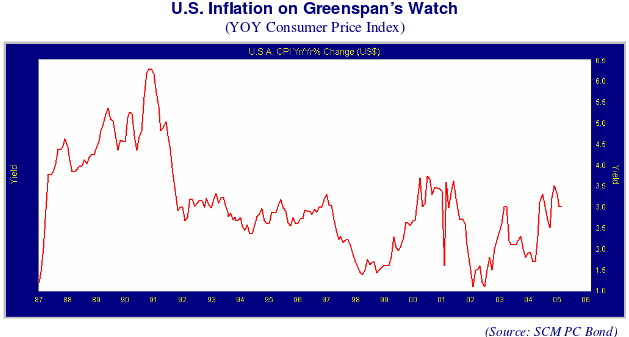 Low interest rates cause higher financial asset prices. Bonds, stocks, residential housing, credit card receivables, home equity loans and other sundry leases and loans have had their prices propelled upwards by low rates. Those reliant on financial income have had to stretch for yield into arcane and risky securities that depend on very low interest rates for their very existence.

The “credit creationists”, the issuers, underwriters and traders of these sliced and diced packages of risk, have profited immensely from the majestic increase in financial asset values due to Mr. Greenspan’s ultra low interest rate policies. When financial receivables are valued at 4% discount rates, the amount of asset backed securities based on these receivables is much greater than at 8%. This excludes the “underwriting creep” of laxer lending standards that requires less and less equity for the same loan amount.

Given the significant vested interest in maintaining a very low interest rate policy, one must consider the possibility that Alan Greenspan might go with the flow and keep his popular easy credit regime in place. The problem is that his term as Federal Reserve Chairman expires in January, 2006 and that he probably does not want to saddle his successor with the problem of dealing with his massive credit expansion at the start of his or her term. Given the nearly universal accolades for his stewardship of the Fed, including a British knighthood, Mr. Greenspan clearly has some reputational and political goodwill to spend. A continuation of his current tightening of monetary policy is likely. Hopefully things will slow down by next January and Sir Alan can leave office on an easing note.

What we’re sure of is that financial asset prices are very exposed to rising interest rates. The Fed policy has been to lower interest rates to stimulate economic activity. Borrowers have borrowed and lenders have lent to largely finance consumption. This consumption boom in the U.S. has not only encouraged spending instead of saving; it has encouraged net borrowing by consumers or “dissaving”, to use the modern economic euphemism.

The savings that funds investment in capital like factories and housing is usually provided by those who forego consumption and retain part of their income in the form of savings. Mr. Greenspan has stimulated U.S. consumers very well. He has not only encouraged happy American consumers to use all of their income for consumption, they have consumed more than their earnings. They have done this by borrowing against their homes in record amounts. Falling interest rates and the absence of prepayment penalties meant much higher loans for the same carrying costs. Refinancing or “Refi” activity has caused a huge increase in mortgage debt by American consumers which has been used to finance consumption. A negative savings rate does not seem to bother Wall Street’s economists or Washington’s politicians. The new economic rationale for this credit binge hangs on the bizarre premise that since residential real estate has increased in value more than the debt against it, this should be counted as a form of savings.

Since U.S. governments and businesses have joined the borrowing spree, the funding for the consumption by American consumers has not been provided by fellow Americans, but has been provided by foreign central banks that have financed the huge U.S. trade deficit. Their currency interventions to keep the bottom from dropping out of the U.S. dollar are invested in the U.S. treasury market. This has kept U.S. interest rates artificially low, since the Asian central banks have been huge buyers of Treasuries. These “captive” investors have also been buying massive amounts of bonds and Mortgage Backed Securities issued by the U.S. Government Sponsored Agencies (GSEs) like Fannie Mae and Freddie Mac which has helped to refinance the “Refi” boom.

The increasingly public problems of the U.S. mortgage banks are not news to our readers. The huge prepayment risk built into the $1.3 trillion mortgage portfolio of Fannie Mae and Freddie Mac will have to be reckoned with. Mr Greenspan himself said:

“It would be difficult, if not impossible to bail out the lenders, known as government sponsored enterprises, should one get into financial trouble.”

Risk is Percolating to the Surface of the Financial Markets

We are not economists or market strategists, but we know an overvalued market when we see one. Risk has been far from investors’ thoughts. As rates move higher, receding credit will cause disruption in asset values and dislocation in financial markets. Recently, the gritty reality of tighter money and higher short term interest rates seems to have risk percolating towards the surface of the world capital markets. The portents are there for those willing to look.

Private equity and hedge funds have amassed billions of capital from institutional investors anxious to find the high return investment promised land. Banks are very willing to lend them their capital that they had carefully husbanded a few years ago. It is not without a little irony that the financial press lauded the recent huge Leveraged Buy Out (LBO) of SunGard, an investment technology firm as the largest since the infamous RJR Nabisco LBO during the “greed market” of the 1980s.

The potential downgrade of General Motors and its finance subsidiary has sent its bond yields towards 10%. The spectacle of one of the largest bond issuers in the United States losing its investment grade rating has sent a chill through the corporate bond market. Bond portfolios that seemed safe a month ago now don’t seem quite as sure a thing. The easy money has been made for this cycle. Investors expecting high returns are now about to experience high risk.