The financial markets were not friendly to investors in the first quarter of 2005. The U.S. Federal Reserve continued to increase short term interest rates in the United States and energy prices continued to stoke inflation worries. Although the Canadian commodity-weighted S&P TSX Stock Index rose 4%, most world stock markets were negative. Bonds were negative in the important U.S. market with Merrill Lynch Bond Market Index down .6%. Risk was not popular in the U.S credit markets. Corporate bonds were down .9%, on widening yield spreads, and the U.S. high yield market was off 1.4% for its first reversal in some time. In Canada, a mediocre quarter in the bond market was saved by a convenient rally in long bond prices on March 31st! This put Canadian long bonds up 2% and the return of the RBC-CM Bond Market Index at 1.1% compared to the negative returns in the U.S.

Canadian bond managers obviously aren’t as worried about the Federal Reserve and rising short term interest rates as their American cousins. Even in the U.S., however, the impact of rising U.S. short-term interest rates has been offset to some extent by a lemming like scramble into longer issues, despite Mr. Greenspan’s attempt to jawbone up the long yields. Investors are seeking safety from the rate increases of the Federal Reserve in long term bonds. The bond market calls this a “bull flattener” which means long term yields will fall even though shorter term yields will rise. We find this curious, as the underlying U.S. inflation performance has not been stellar and the economy cannot be called weak by any stretch of the imagination.

The following chart shows “real” U.S. long term interest rates over the term of Mr. Greenspan as Fed Chairman. A quick inspection shows that long term “real” interest rates have only one way to go, and that is upwards. 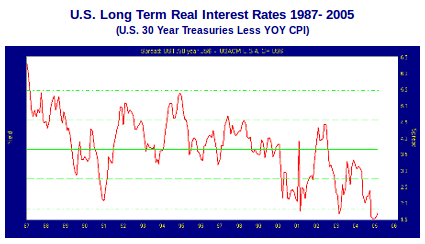 We could conceivably get higher real interest rates by having long term yields drop and inflation drop more. This is not too likely, as inflation is well off its lows and higher energy prices are starting to feed into the economy. This suggests to us that we are likely to have higher inflation and interest rates ahead as the Fed and its Chairman try to “stay ahead of inflation”.

The tightening of monetary policy is not a good thing for credit spreads. Stimulative monetary policy means easy money. Easy money means risky behaviour by financial market participants. We have seen this in the enthusiasm for risk in the bond market which is evidenced by the meagre spreads available on very risky bonds. Typically, the bonds that are issued at the peak of the credit cycle, like the recent crop of new issues, do not fare well over the next two or three years until the bottom of the credit cycle. The last corporate credit cycle saw the tightest corporate spreads (most expensive) in the spring of 1998 and the widest (cheapest) in the fall of 2002. Since the tightest corporate spreads for the recent cycle were seen in February of 2004, we would hazard a guess that the widest spreads will be seen sometime in 2008. This suggests two to three years of generally widening credit spreads.

We believe that the transition from easy to tight credit will not be smooth. We look for a precipitous financial event such as the Long Term Capital crisis in 1998 to kick off the reversal of much of the speculation that we have seen over the past couple of years. Our favourite for this dubious honour still remains the burgeoning risk of the U.S. residential mortgage market. The recent travails of General Motors now warrant serious consideration.

Is GM the Stalingrad of the Credit Markets?

Like a rapidly advancing army that has moved too far ahead of its support and supply lines, the credit markets are very exposed. After surging tighter on the immense liquidity provided by General Greenspan, an impending downgrade of GM and GMAC could be the Stalingrad for the credit markets.

The response of the credit rating agencies to GM’s very poor fourth quarter of 2004 has been telling. General Motor’s consolidated profit was just over $2 billion in 2004 but GM lost money on automobile production. General Motors Acceptance Corporation (GMAC), GM’s credit and finance subsidiary, earned $2.5 billion in 2004 which offset the auto losses. Over $1 billion of the profit came from GMAC’s mortgage lending operation. All the major agencies currently have GM at BBB (low), the lowest investment grade rating. Their press releases on GM compare its current credit metrics to their requirements for an investment grade rating. The rating agencies are leaving no hope that there can be enough improvement over the next few months to avoid downgrade.

Many institutional holders of these bonds cannot hold bonds rated below investment grade and will be forced to sell on downgrade. With $270 billion in debt outstanding and $170 billion in unsecured bonds alone, a downgrade of GM will have serious repercussions for the credit markets. S&P has even recently issued a press release on the prospects for GM after a downgrade. In our view, the credit rating agencies are broadcasting their downgrade intentions widely and hoping that the market does their dirty work. The major damage will be done well before the actual downgrades take place, absolving the agencies of the blame for the economic and financial dislocation.

The blame game aside, we think there is still significant downside to the GM situation. Although, GM and GMAC bonds are currently trading at BB credit spreads of 450-500 bps in the 5 year term, there could be considerable downside if investment grade holders are forced to sell. A downgrade of the much smaller Telus caused the bonds to drop to 50% on selling pressure. The prospect of this large an issuer entering the high yield index has sent junk bond managers into a tizzy. Merrill Lynch estimates that a downgraded GM/GMAC would compromise 6-7% of its High Yield Index in the United States. Rather than positively viewing the entry of this large and well known issuer into the credit bargain basement, they are fearful of its impact, as they well should be.

Our readers know our view on high yield credit. Buy cheaply on fear and sell into enthusiasm. At a cycle peak, like the current market, underwriters issue garbage to satisfy the demand. New issues are increasingly speculative. Reasonable high yield credits are currently priced for perfection. Consider the recent CHC Helicopter eight year B rated private placement at 225 basis points over U.S. Treasuries or Rogers BB trading at less than 200 bps. High yield managers understand that their current portfolios will be under pressure with GM/GMAC bonds trading at yield spreads over 200 bps in excess of their current holdings.

Another very negative factor for the corporate bond market is the huge amount of money currently dedicated to private equity and LBO funds. This sizzling hot money is burning a hole in sponsors’ pockets and has now started to be put to use. Short of bankruptcy, an LBO is the worst fate a corporate bond investor can suffer. Sponsor cash and debt is used to buy out the public shareholders at a higher valuation than the markets have given. The public bondholders are left with a much more levered credit at much wider yield spreads and a substantial capital loss. The adulation accorded to the recent SunGard LBO has no doubt emboldened other LBO funds to be “bigger and better”.

The GM/GMAC downgrade fears are weighing heavily on Canadian corporate bonds as well. This is starting to force spreads wider as can be seen from the graph below. The reducing appetite for credit risk is starting to be felt in demand. New issues are not as oversubscribed and underwriters are increasingly working hard to sell their issues. 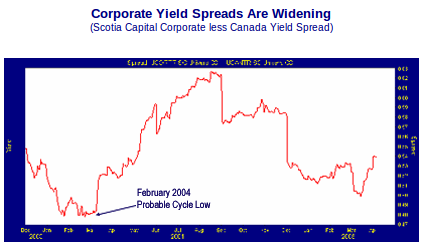 Spreads likely hit their tight levels for this credit cycle in February 2004 and have now started to widen after tightening in the last 6 months of 2004. We believe this is a natural response to the tightening of monetary policy and will continue for some time.

We are very wary of the credit markets for the remainder of the year. We think spreads have reached their lows and will widen as monetary policy is tightened further. Tactically, we would expect the most turmoil in the fall, as liquidity falls and risk makes its reappearance. We expect to further upgrade our portfolio quality in the coming months on opportunity. It does not pay to assume credit risk at these spreads.