Despite the tightening of monetary policy in the United States, long term yields actually fell over the course of 2004. Credit spreads contracted as well, as the substantial existing liquidity in the financial system was put to work. Corporate bond issues continued to sell well and bankers returned to financing speculative deals. According to Merrill Lynch, the largest leveraged financing activity is lending for dividend payouts to sponsors of private equity transactions. In other words, bankers financing the dividend stripping of levered companies! Yes, risk is back in vogue in Wall Street circles.

This overwhelming market enthusiasm for risky assets is a concern, given the meager compensation for the credit risk concerned. The Federal Open Market Committee (FOMC) seems to share our concern:

“Some participants (in the FOMC meeting) believed that the prolonged period of policy accommodation had generated a significant degree of liquidity that might be contributing to signs of potentially excessive risk-taking in financial markets evidenced by quite narrow credit spreads, a pickup in initial public offerings, an upturn in mergers and acquisition activity, and anecdotal reports that speculative demands were becoming apparent in the markets for single-family homes and condominiums.” – Minutes of the Federal Open Market Committee December 14th, 2004

It is hard to conceive that spreads can get much tighter, given the historical experienced loan losses on many of the assets with very narrow spreads. It could take some time for spreads to widen, given the reasonable economic and corporate cash flow conditions. That being said, many financial assets are priced so expensively that it will not take much of a financial market setback for prices to fall substantially.

In our view, the course of U.S. administered interest rates has to be upwards. The Federal Reserve doesn’t really have a choice. The substantial accommodation that the Fed unleashed after the 2000 dot.com stock market crash and the 9/11 attacks has done its job. Financial confidence has been restored and the economy is thriving. A look at the chart below of 90 day US TBill yields and the U.S. CPI speaks volumes of the extent of the Fed “emergency” easing and the distance still to go to get things back to normal.

The U.S. CPI is the same or higher than during the 1998 financial crisis over LTCM and the “Asian Contagion”. Short term U.S. interest rates are 2% lower which makes the “real” or inflation adjusted interest rates in the United States still quite negative! If the dot.com bubble and market speculation was a result of the post 1998 monetary easing, current markets are very exposed. 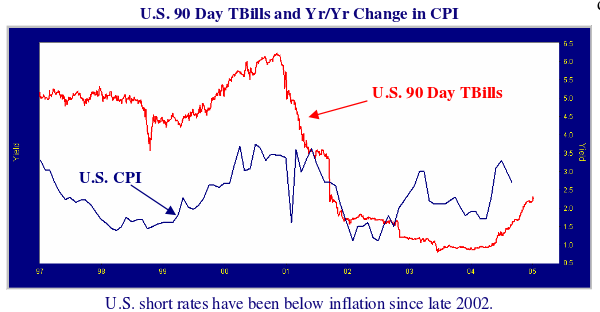 The financial industry cannot say this since it depends on continued optimism to sell its wares. Alan Greenspan, the Federal Reserve Chairman was blunt in his assessment during a recent appearance:

“Rising interest rates have been advertised for so long and in so many places that anyone who has not appropriately hedged his position by now, obviously, is desirous of losing money.” (www.MSNBC.com, Nov 19, 2004).

An area “desirous of losing money” is the U.S. mortgage market and the growing problem of “mortgage hedging”. Granted, we have harped on this issue for the past couple of years, but recent news has started emerging on this “unmentionable” subject. Fannie Mae, the largest U.S. mortgage company, has just fired its Chairman, Franklin Raines, for improperly accounting for its mortgage hedging activities. It seems the company and its auditors had applied hedge accounting inappropriately in its financial statements.

Our objection to “mortgage hedging” is that there is really no one to buy the huge prepayment risk inherent in the huge and bizarrely structured U.S. residential mortgage market. Since there is little penalty to refinancing mortgages when rates are falling, homeowners repay their mortgages and get cheaper financing. For the same payment, a borrower can increase the mortgage and use the cash.

No one else in the industry thought “mortgage hedging” met the strict definition of an accounting hedge but it was used to produce smoother earnings and management bonuses at Fannie Mae. It now seems that Fannie is $4 Billion or so short of capital if the proper accounting is applied. Hence the huge preferred share issue that is now planned by Fannie Mae to raise capital at the urging of regulators. If this is what happens with current interest rates, we are not looking forward to what happens when mortgage rates increase substantially and prepayments drop significantly.

The 7.3% return of the Canadian corporate bond market in 2004 was reasonable compared to the overall market at 7.1%. Although spreads narrowed, the shorter term and duration of the Corporate Index was a disadvantage with the decline of interest rates in 2004.

The open financing window had issuers coming to the market to refinance existing higher coupon debt with longer-term and lower coupon issues.

We think that many new issues are absurdly expensive. The recent enthusiasm for BBB (low) issues at spreads well inside 100 bps is a sure sign that the stretch for yield is in its final phase. The following chart shows that BBB spreads are now through their tightest levels of 1997 and 1998: 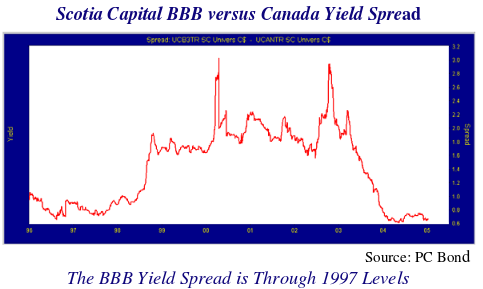 The recent issue by Riocan Real Estate Investment Trust (REIT) is a great example of the market’s enthusiasm and willingness to pay up for yield. This new issue was priced at 85 bps (.85%) over Canadas, pretty narrow for a 3 year BBB (low) credit. Additionally, this issue was issued under a new trust indenture, which allows an increase in total indebtedness from the current 55% maximum limitation to 60% when the current debt is retired. The new limit is well in excess of the initial 50% total debt limitation when Riocan first issued unsecured debt in 1997 which was coupled with a maximum secured debt limitation of 40%.

It is notable that the Riocan trust indentures do not include their guarantees, which are considerable, under the definition of debt. At 60% in debt, considerable mortgage debt ranking prior and guarantees ranking equally with unsecured issues, this was extremely cheap financing for the issuer. We’re not too sure how well the buyers will fare with the issue. The last boom in unsecured REIT debt issuance was in the peak of the credit market in 1997 and 1998. These issues sold off in the credit debacle of the late 1990s as investors shunned anything rated BBB. In 1999 to 2002, when the unsecured REIT debt issues languished, we bought substantial positions in these issuers at spreads well in excess of 250 bps. At the time, the biggest market concern was the ability of REITs to refinance their outstanding debt. REITs like Riocan were forced into financing through the commercial mortgage market and Commercial Mortgage Backed Securities (CMBS) due to the trepidation of bond investors.

A mere three years later, with investors whipped into a feeding frenzy by yield starvation, we are seeing unsecured REIT bonds being snapped up by investors once again. Given the meager returns for assuming not insignificant credit risks, we would expect today’s corporate bond enthusiasts to be scared out their positions in the not too distant future. Long live the credit cycle!

“Caution is Our Middle Name”

We see spreads widening eventually in 2005. Last year, we thought corporate spreads had further room to narrow given the strength of the economy and ample liquidity of the financial system. This year, we think that spreads will widen. The further tightening of monetary policy will combine with major infrastructure and capital spending to increase real interest rates. Credit spreads will be under pressure as supply develops and other income products rise in yield.

Rising interest rates will also slow the economy and cause corporate credit quality to deteriorate. Despite today’s rosy default rate, we are planting the seeds for the next credit bust in today’s new issues. The level of CCC and CC rated debt as a percent of debt issues has risen to historical highs. All debt rated below investment grade is considered “speculative” by the credit rating agencies. Issues rated CCC and CC are in the category just ahead of default and are, to use Standard and Poors’ description, “highly vulnerable to non-payment”. The popularity of these new issues from “near death” companies speaks volumes of the mindset of today’s corporate bond investor. In the “fear and greed” spectrum, we are clearly well into the greed portion.

Given the complacency of lenders and investors, a market downturn or a financial accident could induce enough fear to move spreads substantially wider over a short period as was the case in 1998. We think it does not pay to invest heavily in today’s poor credits at today’s tight spreads. To paraphrase Austin Powers: “caution is our middle name”.