Loose monetary policy and a strong North American economy restored confidence to the credit markets in 2003. With plentiful liquidity chasing investment opportunity, portfolio managers, financial institutions and retail investors provided a strong and sustaining bid for corporate bonds. The corporate bond market in Canada resumed its spread narrowing, with substantial momentum, in the fourth quarter of 2003.

The chart below shows the sheer magnitude of the collapse in spreads, which left bond managers underweighted in corporate bonds looking for anything with yield. New issues continued to sell out quickly. The frenzy was so strong that many new issues had their “five minute warning” of order book closing made just after the deal’s announcement. 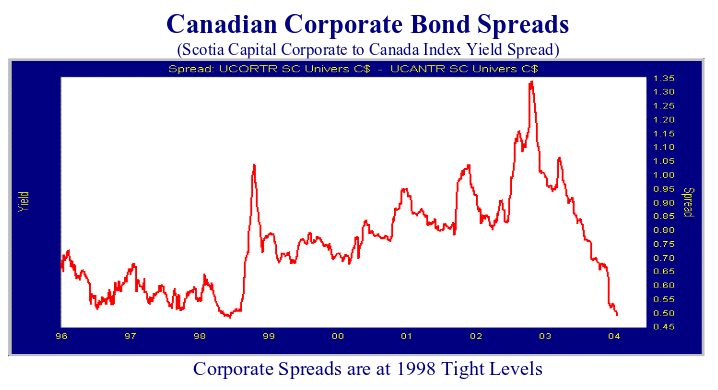 The new issue market for BBB bonds saw a dramatic resurgence in the latter half of the year, after the popular CP Rail 10-year and Shopper’s Drug Mart 5-year BBB issues did well in the pre-summer period. This caused a sympathetic reaction in the secondary market, as dealers and pricing services reacted to the tight spreads in the primary market by marking up the price of secondary BBB issues. 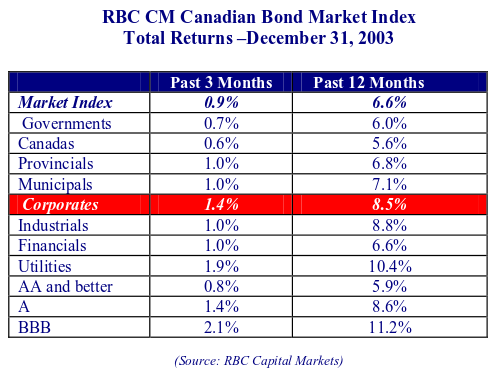 Corporate Bonds are not Cheap

The strong performance of corporate bonds in 2003 is not likely to be sustained in 2004. Spreads cannot contract enough to repeat the capital gains that we saw last year.

Our last quarterly report commented that although spreads were tight, they were reasonable given the financial liquidity and economic strength. We believe that we are now at fully valued levels, with perhaps the exception of long corporate bonds. The additional yield currently available from lower quality new issues does not justify the additional risk currently being taken on by investors over the longer term.

We still believe that the momentum in the corporate bond market will be sustained for a time, both from ample liquidity and economic improvement. On a longer term basis, we think that the current crop of popular issues will widen over time to more rational levels. This could take a year or two, as the new issue afterglow fades and issues emerge with these credits. We look for stable to modestly tighter spreads until monetary policy is tightened, with a risk of a setback from a financial shock similar to the 1998 currency crisis.