Investment strategists and bond managers around the globe weren’t going to be fooled again. They were bearish on the prospects for bonds at the start of 2011 and bullish on risk assets. The Euro debt crisis then handed them a flight to quality into U.S. and other “safe” government bonds and pummeled anything else. This made for an exquisite set up going into 2012. Forecasts had risk assets continuing their descent into financial Hades and safe government bonds continuing their ascent into the financial Heavens.

Of course, after such extreme pessimism, the market began to rally in January despite the nay saying experts. After a month or so of an unexpected rally, the experts “updated” their forecasts to include the hitherto improbable, if not impossible, continued existence of the global financial system. Various reasons were trotted out as explanation, the most popular of which was the very effective Long Term Refinance Operation of the European Central Bank. Its power was plain to see upon its announcement in November but only visible after the rally was well in hand.

Since we have not studied enough financial economics to gibber numbers and statistics galore, we turn to simpler explanations. It seemed to us in November that the ECB dropping gobs of Euros into the maws of the desperate Euro banks was not a bad thing. It just might reduce the hysteria over funding that the Euro banks were experiencing. Simply put, if they had liquidity reserves, they wouldn’t have to sell great swathes of their assets at distressed prices.

Well, things turned out just about the way we thought they would. The Euro banks got cheap funding and the fears that they were all going bust died down. The knock on effect of the LTRO was that since the banks weren’t selling, buyers couldn’t just wait for further price drops and began to put capital to work. Once the banks saw that the worst was past, they started buying as well. 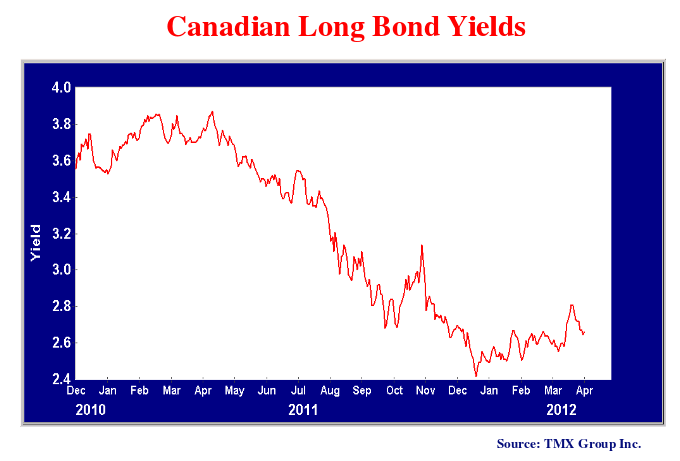 That made the first quarter of 2012 the best for the credit markets in quite some time. Spreads collapsed on panic buying and corporate bonds went “bid”. Anything with yield was on fire, and the new issue market was wide open, exceeding its 2009 records in some markets. Canada saw the spread tightening but lagged in the new issue market, as banks funded in the U.S. credit markets. Bond yields in Canada rose as the flight to quality reversed, contrary to the well established expert opinion. There were lots of things to be bearish about and strategists were in denial until the rally was in full flight.

The previous chart shows long Canada yields reached their low in mid December 2011 and have been rising for the last 3 months. Is this the start of the long awaited end of the Bull Market in bonds that started when yields peaked in 1981? We’ll leave that for market strategists to determine. What we will say is that yields on government bonds are very low compared to inflation. The chart below shows the yield on the 10 year Government of Canada bond since 1945 and shows that its yield has not been this low since 1945. We have also plotted the Canadian Consumer Price Index (CPI). The graph also shows that there have been very few periods when the CPI has been higher than 10 year Canada yields, as it is now. 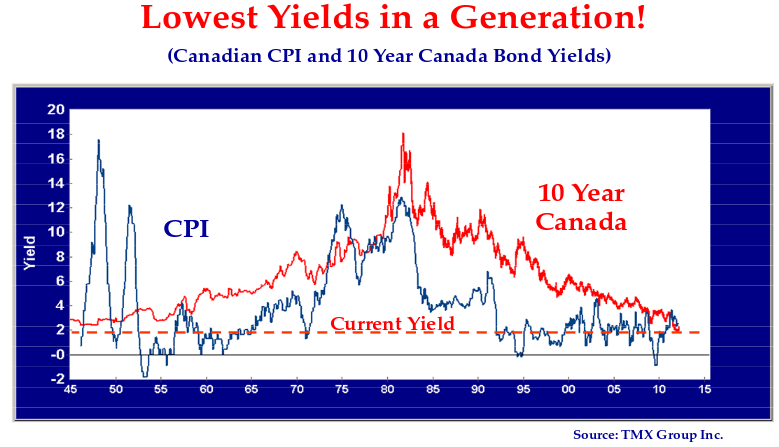 We explored the relationship between the 10 year Canada yield and the year over year change in the Canadian CPI in the following graph. This shows the “real yield”, the 10 year yield less the CPI since 1945. The current 10 year Canada yield of 2.0% minus the trailing year over year CPI of 2.6% makes for a real yield of -0.6% (2.0% – 2.6% = -0.6%). The average 10 year Canada real yield has been 2.5%. The only other time that the real yield was this negative was in the mid 1970s which is not a good portent for the Canadian bond investor, since it was during a period of high and out of control inflation. 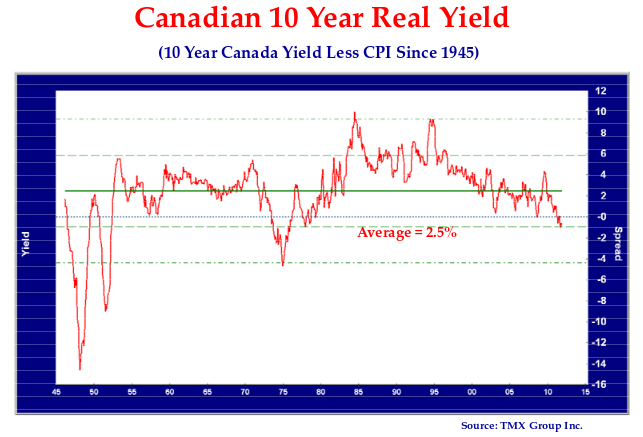 The bad news is that yields are low and are destined to rise at some point. The good news is that corporate bond spreads are very attractive at present. In the chart below, we detail the corporate bond yield spread of the DEX Mid Corporate Bond Index to the DEX Mid Canada bond index. This spread, or additional compensation for the risk of holding a corporate bond, has averaged 0.98% since 1980. Its current level of 1.4% is still very attractive on a historical basis and compares to the very high spread levels of the recessions of 1981 and 1992. It has only been exceeded during the Credit Crisis of 2008. 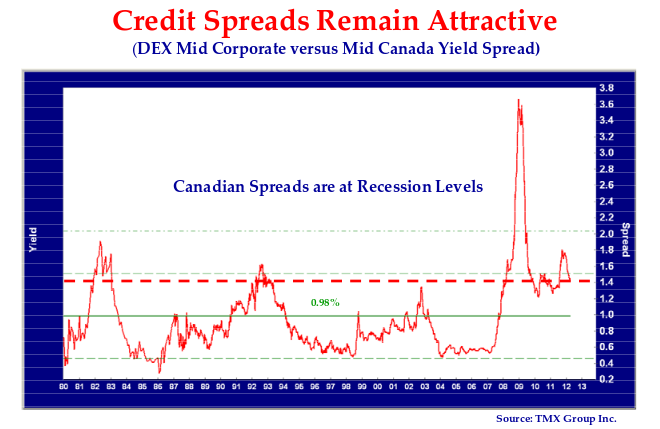 Since we are not prescient enough to decide on the future course of the world economy and financial system, we limit ourselves to saying that the current spread on Canadian corporate bonds justifies holding them. Yes, the very high spreads of 2008 exceed those at present but we believe the financial system is in much better shape than during the Credit Crisis.

So you ask, government bond yields are at generational lows but credit spreads are close to generational highs, so what should a bond investor do? There is something that allows investors to avoid very low bond yields while exploiting the very wide credit spreads. It does not have the “sex appeal” of Private Equity or a sophisticated hedge fund strategy but we think it will probably beat both of these overhyped and overvalued “asset classes”.

Behind Door Number One we unveil to you the unwanted, unloved and disreputed “floating rate bond”. A floating rate bond is a bond with a coupon based on an interest rate benchmark such as LIBOR (the London Interbank Offering Rate) or CDOR, the Canadian equivalent. At each quarterly or monthly “reset”, the coupon is adjusted based on the interest rate for the benchmark in question and the interest payment is calculated on this basis.

The interesting thing now is that the holder gives up very little current yield to invest in a floating rate security. CDOR is currently not much different than the yield on a 2 year Canada and we like the idea that a floating rate bond could increase its coupon with a rise in interest rates. The chart below shows the Canadian Prime Rate and the CPI since 1940. Note that the Prime Rate was 5% for the low inflation 1950s and 1960s, much higher than the current 3%. More germane to our argument is that the Prime Rate has seldom been so low compared to the CPI, reflecting very loose Canadian monetary policy. 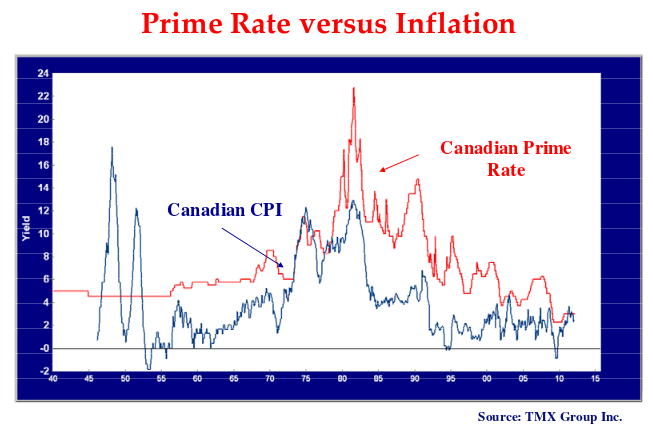 We show the “real” Prime Rate in the chart below, the Prime Rate less the year over year CPI. The average has run over 3% and the current flat to negative level is very low. Investors have to give up very little to gain the advantage of a floating rate that would increase with interest rate increases. We believe this reflects very aggressive monetary policy and very low inflation expectations which defy the actual reality. 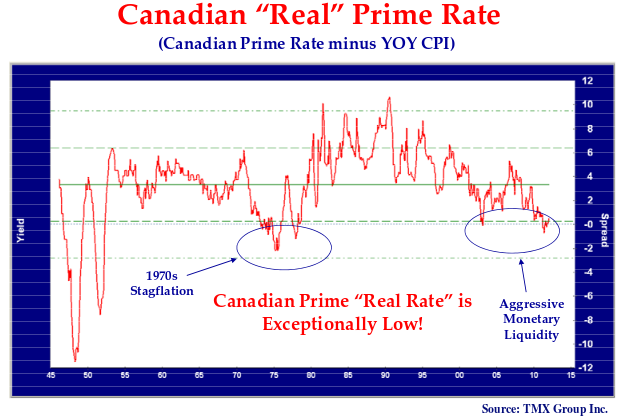 The last time that we had a very low real Prime Rate was in the 1970s Stagflation, a combination of low real economic growth and persistent and rising inflation. Sound familiar??

We think that floating rate securities are very cheap at present as the consensus investor is not interested in protecting his income from the ravages of inflation. The flight to safety still dominates the consensus as investors fret about Europe, China and the fragile state of the economy. The last time we saw an opportunity like this was when inflation linked RRB yields in Canada hit 5.4% as investors could not grasp that the real yield could fall even with lower levels of inflation.

People will worry about Europe for quite some time, as the market undergoes its version of Post Traumatic Stress Syndrome. Crises real and imagined dominate consensus portfolio strategies and will for some time as the memory of the Credit Crisis and Euro Debt Crisis linger. If and when the world does not end, we think that corporate bonds at historically wide spreads are very attractive. We also think that buying floating rate bonds at similar or better cash yields to fixed rate bonds will be a winning strategy if interest rates return to more normal levels compared to inflation.

Why buy a Canada bond at yields lower than inflation? Because that’s what makes you and your clients feel safe! It’s not easy to be different. Humans like to herd in behaviour and they are currently fighting the last war of financial panics and crises. Like the minnows drawing tighter into their school when a Barracuda approaches, they feel better despite the impending danger.