A strong consensus developed in the first half of 2010 that interest rates would rise. This consensus was near universal. It was shared by professional and retail investors, financial pundits, and with all important confirmation by taxi drivers.

Contrary to the Consensus

The consensus rationale was essentially that all the money that governments printed to defeat the credit crisis would end up in the real economy and thus create consumer price inflation. While we are not a fan of lax monetary policy, we did not subscribe to the “buy gold” inflationist hysteria. Call us naïve but we felt paper money had at least another quarter or two to go before it lost its entire value as a medium of exchange.

Our rationale was that it is very hard to have real goods inflation in a period of debt deleveraging. With the amount of financial institution leverage allowed by financial regulators declining, we believed that this overwhelming consensus was too one sided. Mr. Market has a way of correcting periods of consensus certainty with sharp and expensive lessons.

As the chart below shows, contrary to the consensus expectation of higher interest rates and inflation, the yield on both Canadian and U.S. long term bonds fell sharply in the third quarter of 2010. U.S. economic growth was weaker than expected and the sovereign debt problems in Europe caused a “flight to safety” into long bonds. This led to a nearly 5% appreciation in the price of long bonds. Bond managers short of their duration benchmarks left considerable money on the table. 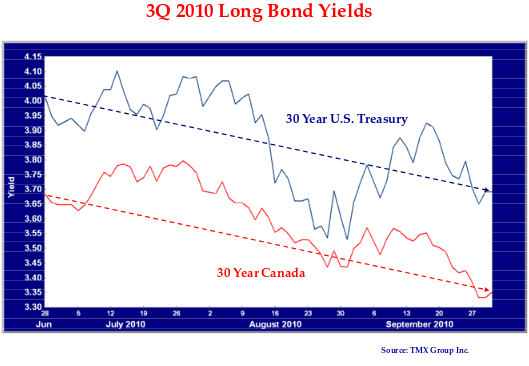 The drop in U.S. bond yields was explained by the financial press and pundits as recognition of continued economic weakness. Commentators seeking the limelight became direr in their predictions with the dreaded “double dip” recession once again having traction in the financial press. Surprisingly, equities also had a good quarter. As the gloom over the European peripheral debt problems lifted, the stock markets rallied into quarter end. The Canadian TSX index was up 10.3% and the U.S. DJIA index was up 11.3% over the quarter. This led to asset mix rebalancing toward the end of the quarter as fund managers sold equities and bought bonds to achieve their asset mix targets. This bid for bonds led to further downwards pressure on bond yields.

Now that the consensus seems firmly entrenched with economic doom and gloom, the question that now presents itself is whether the current low level of U.S., and by extension Canadian, interest rates is justified. The continued retail investor buying of bonds is a reflection of their financial income deprivation. Widespread talk of a “bond bubble” questions whether the investors chasing yield in bonds understand the possible downside of bond prices. Recent strong inflows into U.S. high yield and leveraged-loan funds is evidence that investors have all too soon forgotten the recent record defaults in this asset class. Despite this worry of a developing bond mania, we cannot help but wonder if Joe Public understands the pervasive economic weakness much better than the coddled and well paid investment strategists and economists of Wall Street.

Our belief has been that the U. S. and most of the developed economies are suffering from a debt hangover that will slow their growth for some time. The financial innovation that caused the credit bubble saw debt financed spending by consumers with very little income growth. With consumers now in debt repayment mode and their incomes under pressure, it is hard for us to see where the domestic U.S. economic growth will come from. Exports are a necessity for the U.S. with the housing sector and consumer spending in a deep retrenchment.

Our debt deleveraging view is gaining adherents. In a paper for the Jackson Hole Federal Reserve conference, Vincent Reinhart, a former Fed economist, presented a paper that he had authored with his economist wife Carmen. The Reinharts had looked historically at the economic entrails in the period following a financial crisis and the portents for the developed economies were not good. Debt built up before a collapse to unsustainable levels reverts to more normal levels in the aftermath. By their measure, debt as a percentage of GDP normally rises by about 80% prior to a credit crisis and then takes about 8 years to reduce to its prior level.

The problem can be seen by using some rather rudimentary arithmetic. The ratio of debt to GDP in an economy is the total debt divided by the sum of the value of all goods and services produced. Central bankers and regulators know that the level of debt before the credit crisis was unsustainable. On one hand, they want to establish prudent financial regulation which means there will be less debt. On the other hand, they know that if they let the stock of outstanding debt fall it will likely cause a severe economic shock and depression. This means they are trying to expand the amount of nominal economic activity and grow GDP while avoiding debt liquidation and economic collapse.

The problem is that much of the economic expansion that led to the current predicament was based on consumer credit growth which fuelled real estate investment and consumer spending. The credit growth was abetted by the naïve view of regulators that the massive debt expansion was appropriate as derivatives and other financial innovation had caused a “Great Moderation” in financial risk.

Now that the financial innovation has been laid bare as quantitative idiocy on a massive scale, the regulators are busy reregulating the financial sector they previously allowed to self destruct. This means that financial institution leverage is falling. Financial institutions are now looking at their balance sheets with trepidation as new regulatory standards are put into place. “Off Balance Sheet” subterfuge is verboten and much more capital will be held for risky investments. Minimum liquidity requirements are also being designed to allow banks to withstand severe disruptions in credit markets to avoid future liquidity runs.

The desire of regulators to rein in risky behaviour by the banks is moderated by their need to encourage continued lending by the very same banks. The problem is one of timing. Without inflation, it takes a long time for an economy growing at 1-2% to expand GDP enough to lower the debt to GDP ratio. This leads to the slow growth that the Reinharts observed in their research of economic growth following financial crises.

The current debate between the inflationists and the deflationists hinges on the ability of monetary policy to grow GDP despite the necessary debt delevering. The inflationists believe that politicians will shirk from the financial pain of austerity, slow growth and unemployment and print money instead. Monetary inflation will grow money supply and deflate the value of debts in real terms. The deflationists believe that monetary policy is, as termed by John Maynard Keynes, “pushing on a string”. The contraction of private debt will overpower government debt funded deficits and money creation. Japan’s many years of deflation after a debt crisis, despite loose monetary policy and ultra low interest rates, is their obvious example.

We do not believe that the extremes of inflation and deflation are likely scenarios, short of another financial calamity. The very extreme monetary policy response to the credit crisis was effective in stemming the banking panic and makes continued financial problems unlikely. We expect that the economic outcome will be decided in large part by the growing political desire for “belt tightening”. The instinct of individuals to rein in their spending and reduce their debts is being expressed politically and politicians are listening. At all levels of government, politicians are heeding their electorates and promising austerity.

This would not be such a bad thing if there were private sector demand to replace the decline in public spending. The problem is that consumers in the developed world are retrenching and corporations are not seeing the need for investment with weak domestic sales. This leaves exports as the only engine for growth in most developed countries.

The focus on exports is dangerous, as all countries strive to maintain their market share. Increasingly, trade policy is being expressed by currency manipulation. The U.S. dollar has declined against most of its major trading partners except China which pegs the yuan to the dollar. The brazen example of China’s currency manipulation as a matter of domestic economic policy is now being mimicked around the world. Brazil’s finance minister, Guido Mantega, has coined the term “currency wars” in his criticism of currency manipulation. The international trade tension is also felt in the increasing domestic complaints in the U.S. and other developed countries against free trade. Domestic political considerations make the theoretical advantages of freer trade a hard sell to workers who have seen their jobs “offshored”.

To us, the policy responses will dominate other economic considerations. We are not alone in this conclusion. Studies are showing that the prices of individual stocks are moving in a very correlated fashion. Stocks are now moving together to the greatest extent since the Great Depression of the 1930s according to the Wall Street Journal (Macro Forces in Market Confound Stock Pickers). Investors realize that the prospects for businesses are deeply subordinated to the economic climate which hinges on policy response. Would a Chinese exporter be profitable with the yuan up 30%?

As we’ve said in our other recent reports, we think the markets are range trading between economic optimism and pessimism depending on the most recent reading of economic entrails. There is no quick and painless solution to a debt deleveraging. This is a long process which at times will seem endless: