With “Gold Bug” interviews featured on business television and talk of “bond bubbles” rampant in the financial press, one can be excused from missing the massive bond market rally in the 3rd quarter of 2010.

Canadian long bond yields reached lows not seen since 1955 on the back of the European peripheral debt crisis and an obviously slowing U.S. economy. The consensus exists to be surprised, and this time it was left in utter and abject confusion. As the chart below shows, the previous low yield of 3.38% in December 2008, achieved in the middle of the credit crisis, was bettered by .05% on September 28th, 2010 with a yield of 3.33% on the Canadian long bond. 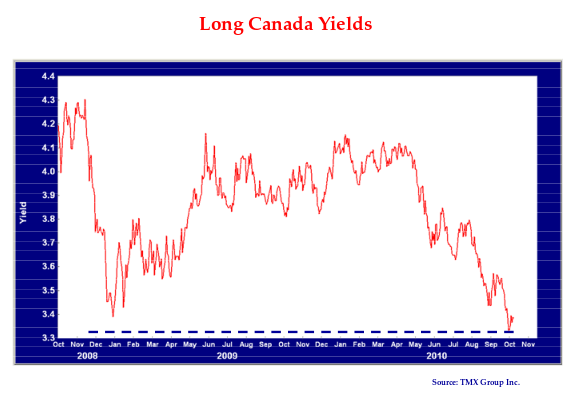 Those who believe in market efficiency can be forgiven for wondering how yields can plummet at the same time that gold is making new highs and commodity investing has been restored to its pre credit crisis gluttony. Statisticians would call the consensus “bifurcated”. In one corner we have the inflationists with their dire predictions of the end of paper money as a store of value. In the other corner we have the deflationists who see a debt deflation in progress that no government or central bank can arrest.

In the middle of the ring is the consensus which gloms on to whichever argument seems to be supported by the “facts on the ground”. Given the turning point nature of the debate, the facts change very quickly depending on the economic statistics de jour. Speculators add to the volatile market climate with their leveraged bets, literally moving markets on a minute by minute basis.

As the chart suggests, the trend for long-term interest rates since May has been down. There’s nothing like missing a rally to give bond managers the conviction to buy long bonds. The quest for long term and duration has spawned several issues of 100 year bonds in the U.S. Even Mexico, the serial inflationist and financial crisis engenderer, has stepped up to the plate with a 100 year issue. That Mexico, a country locked in a death struggle with a drug cartel insurrection, can issue a bond that will not be repaid in any of its holders’ lifetimes, speaks volumes of the stretch for yield.

Hit Me One More Time

The stretch for yield continues anew in the high yield market. Despite our generally low opinion of investor acumen, even we are surprised by how quickly high yield bond managers have recovered from their credit crisis battering. Despite losing 40% of their portfolios in the fall of 2008, high yield managers have not only got up off the mat, they have stuck their chins out for another pasting. The high yield bond market is so hot that deals are being done with weak investor protections for the nefarious purpose of “dividend recapitalization” i.e., borrow a bunch from stupids and pay it to yourself in the form of dividends with no recourse back to you. We can see why the corporate sponsors want to do this but we have no idea why high yield types are falling over themselves to buy these deals.

One significant and developing corporate bond danger is the return of the Leveraged Buy Out or LBO. Many high yield bond and bank financings are being done for the purpose of buying public equity and “recapitalizing” the issuer. Another trick is to buy a company and spin off assets to pay for the acquisition. An example is the current Dynegy situation where private equity firm Blackstone is buying this formerly bankrupt energy company. They are funding it with the sale of valuable natural gas contracts which will leave the unsecured bondholders in the lurch. The “senior” bondholders have now seen their pristine CCC rated bonds downgraded to C. The bondholders shouldn’t be shocked. A CCC rated issuer has a 50% chance of bankruptcy over a 5 year period . The now single C rated bond is basically “pre-default”.

An LBO works by levering up a company with new debt or securing new debt ahead of existing debt. This massive transfer of wealth between creditor classes hinges on the weakness of the protections to the existing debt holders. The current crop of corporate bond issues feature very weak protections for bondholders which will eventually wreak much value destruction on bond investors not prudent enough to know better.

Corporate bonds didn’t excel in the rally of this past quarter, as credit fears caused spread widening. The table below shows that Government and Corporate bonds tied in performance with a 3.2% overall return. This masked a dichotomy between Canada bonds at 2.4% which contrasted with Provincial and Municipal bonds at 4.5% and 4.2% respectively. Investors obviously wanted spread product and thundered into provincial issues which saw spread tightening and also benefitted from their longer duration. Lower quality won the day in corporate bonds. BBB bonds returned 3.9% compared to AA at 2.7%. The laggards were Financials. Financials returned 2.3% in the quarter versus 3.2% for overall DEX Corporate largely due to the underperformance of Tier One capital issues. These issues suffered from fears of a regulatory call. 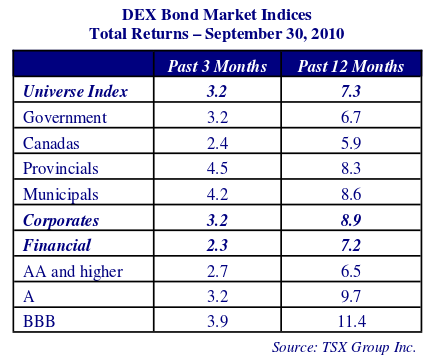 In terms of our outlook for interest rates and inflation, we are firmly and utterly convinced that we do not have a clue what is going on and that no one else does either. The truth is, an economic and market forecast currently cannot be made without deferring to policy makers. Policy will dictate the outcome for the markets, be it inflation or deflation. Since policy makers also do not have a clue as what the economy is really doing, this makes for a very opaque and unstable market for bonds.

It is not happenstance that recessions and depressions in economies are accompanied by more conservative political and social trends. The hem lines go up on women’s skirts in booms and go down in busts. People under economic pressures tend to reduce the risks in other parts of their lives. Divorce rates fall in recessions as financial considerations replace romantic. Our sneaking suspicion is that the “small c” conservative drift in politics and society will eventually enter the monetary realm as well. Inflationists waiting for “Helicopter Ben” Bernanke to drop the monetary nuke of massive “quantitative easing” (stuff money into banks until people start to spend it) could be disappointed if the Fed and other central banks drift to more conservative monetary policy. Is this out of the question? The U.S. Supreme Court has moved sharply right in a deliberate political move orchestrated by conservative activists. It is certainly within the realm of possibility that a U.S. electorate fed up with rescuing the financial class might use its politicians to “restructure” the activist Bernanke Federal Reserve. Tea Party anyone?

Not a Debased Place

The good news is that Canada will likely continue to have an effective paper currency even if Bernanke and the Federal Reserve actually succeed in debasing the U.S. dollar. The commodity based Canadian dollar will likely in all probability soar against a depreciated Yankee equivalent. Two interlinked economies and trading partners can have vastly different inflation and interest rates. Think Japan and the U.S. and pre-Euro Germany and Italy. A super strong Canadian dollar would devastate Canadian manufacturing exports but falling import prices would keep both Canadian inflation and interest rates subdued.

While it is nice to pretend that we can predict the future of the hugely complex global economy and financial system, the reality is grittier. Unfortunately for us and other bond investors, we are “price takers”. With central bankers dictating that interest rates remain low, squeezing extra yield out of portfolios is very difficult without accepting undue credit and interest rate risk. Until things break to inflation or deflation, extra yield is a very handy thing to have and this is what will preoccupy us.

Although the absolute level of bond yields is low, corporate bond spreads are still wide in absolute terms. In relative terms, the ratio of corporate bond spreads to the underlying Canada yields is also very high. We don’t believe this is an accurate measure of value, however, as default losses are a function of principal and spread compensates for this risk. In the chart below, we show the yields of the DEX (formerly Scotia McLeod) Long-term Corporate Bond Index (red line) and the DEX Long-term Canada Bond Index (blue line). The long DEX corporate history dates back to December 31st, 1947 while the long Canada history starts in 1976. 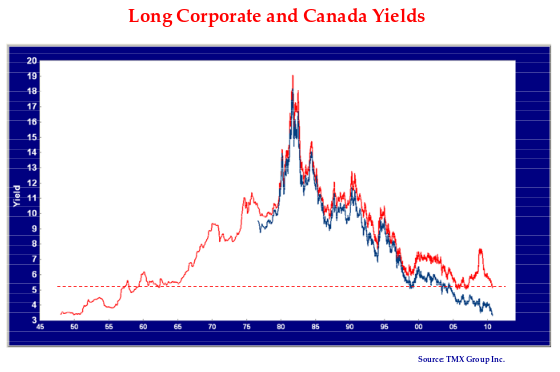 The chart shows there was a similar period of lower long corporate yields from 1955 to 1965 and even lower yields from 1947 to 1955. The 35 years from 1965 to 2000 saw much higher yields, reflecting higher levels of inflation expectations. If inflation remains subdued, corporate bond yields are very attractive at their current levels. Much depends on the general course of interest rates and inflation.

The current departure of Canada yields from corporate yields is quite evident. This is captured by the spread graph below which shows the current wide level of long corporate spreads. Other than the exceptional level during the illiquidity of the credit crisis of 2008, the long corporate spread is currently at a very high level. We continue to believe that this represents exceptional value and have weighted our portfolios accordingly. 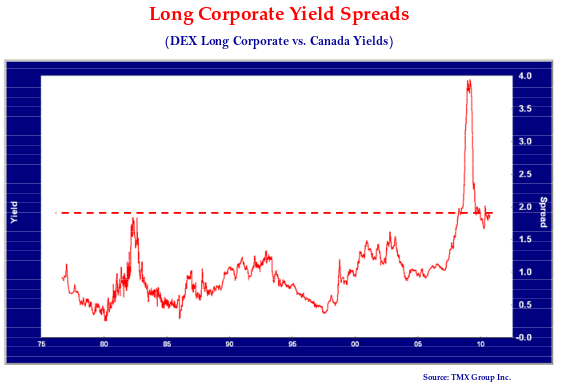 Is the absolute level of interest rates low? ABSOLUTELY. If one needs financial income, however, corporate bonds are the only choice without taking on the risk of equity investment. Will inflation and yields rise? PERHAPS. Are corporate yield spreads good value? A RESOUNDING YES.

Smarter people than we can stake their portfolios on the vagaries of policy. Our job is to maximize yield at an acceptable credit risk.

This we are doing.