Our newsletter production dropped significantly in the last year. To our surprise and dismay, we now realize our last Canso Corporate Bond Newsletter was published in May 2008. We apologize to our loyal readers who have pointed this out.

Our journalistic productivity evaporated for a couple of reasons. Firstly, the rapidity of the credit crisis and the resulting policy responses stale dated any explanation. Every time we came to publish, things had changed and needed a rewrite. Secondly, we were too busy buying cheap bonds for our clients to devote much time to public relations.

In defence of our journalistic dithering, our readers were rather well informed and prepared for the credit crisis. A perusal of our newsletter archive will show that we had savaged inane bankers, credit ratings, hedge fund leverage and the securitization mania for some time before the whole shebang melted down in 2008. The Canso Corporate Bond Letter of February 2007 highlighted the credit excesses that are now being blamed for the financial meltdown. Well before the investment herd had an inkling of their impending credit doom, we believed that the “credit innovations” of Wall Street would make things worse:

“Such immense speculation does not go unpunished by market forces…A tightening in credit standards will follow and feed into the illiquidity of credit markets…the financial innovations that are lauded today will be rued as their increased leverage and market pricing add to the credit downturn.”

Despite our foresight, even we must admit to being surprised at the ferocity of the credit crunch and the desperate and unprecedented policy innovations of central bankers and regulators. In our last published Corporate Bond Letter of May 2008, we thought that the credit crunch was ebbing after the rescue of Bear Stearns in March and that corporate bond spreads were good value at that time. 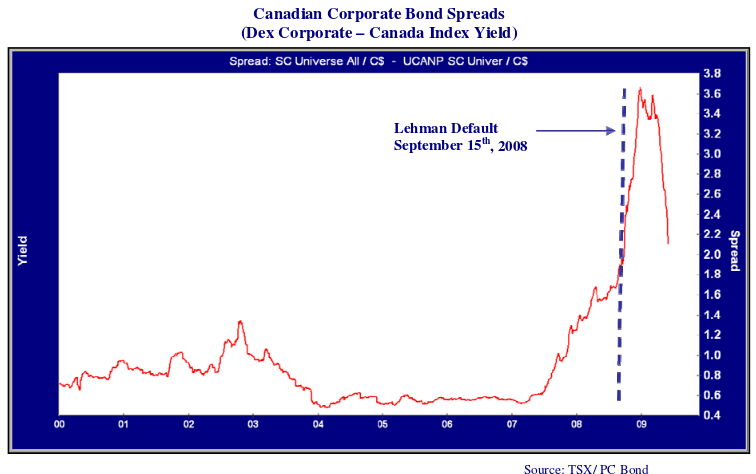 As the chart above shows, corporate bond spreads had gapped significantly wider by May 2008. They had moved from .5% over Canada bonds to almost 2%. Amazingly, they were destined to reach almost 4%! Now that we are almost back to where we were last summer, the real question is whether corporate bonds are cheap at their current spread levels.

A negative case is fairly easy to make, given the absolute economic carnage of the credit crisis. The newspapers are full of bad economic news. Personal bankruptcies and unemployment are rising. Major employers like Nortel, Abitibi and now General Motors have sought creditor protection and are slashing spending and payrolls. Things are indeed bad economically and seem set to get worse. 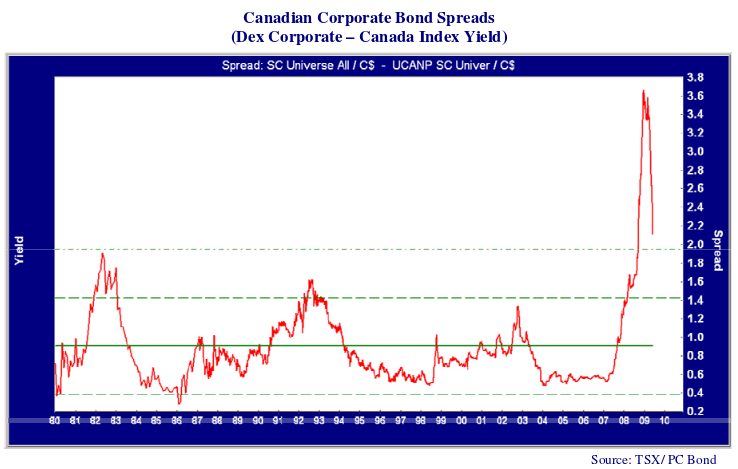 The credit crunch and banking crisis of 2008 had put corporate bonds in “no bid” territory with many sellers and very few buyers. The peak yield spread of 3.7% on December 29, 2008 was the absolute historical high since 1980. It was also 5 standard deviations above the mean, statistically a very rare event. We at Canso believed this was a once in lifetime buying opportunity. We were very busy buying cheap corporate bonds, as evidenced by our lack of journalistic commitment.

Corporate bond spreads have declined over 1.5% since the peak. We believe that the market has now put aside major financial disaster. The fears of major banks defaulting have receded, due to the huge global government rescue effort. Yield spreads are still higher than during the deep recession of 1981, suggesting corporate bonds are now adequately priced for even a severe recession. The prospect for imminent further yield spread compression depends on the economic recovery. We are in a serious recession, but it remains to be seen if it worsens further.

We can take some guidance from default rates. We at Canso are firm believers in the credit cycle. Tight money and recession cause high defaults and loan losses that cause yield spreads to increase. Easy monetary policy improves the economy but inevitably lasts too long and ends up with speculation and credit excess. This can be seen in the chart below which compares the yield spread on the BBB portion of the DEX Corporate Index to the number of defaults in Canada. The number of defaults in a year can be seen from the blue bars referenced to the left axis. The red line indicates the spread of BBB bonds compared to Canadas as measured against the right axis.

It shows that maximum yield spreads coincide with periods of high defaults. In the 1991-1993 period, the highest number of defaults coincided with the peak in BBB spreads in 1992. In the 1999-2003 period, the high in defaults occurred after the peak in corporate spreads in 2000. A period of protracted defaults, like the 1999-2002 period tends to keep yield spreads at higher levels. 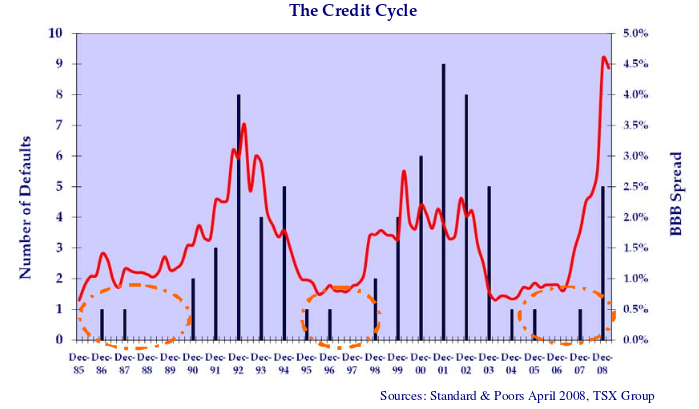 The lowest corporate yield spreads occur in the “sweet spot” after the recession. A strengthening economy does not necessarily cause inflation. During a recession, companies cut costs and improve their long term cost structure for both capital and labour. Corporations expand production as revenues increase but their excess capacity means that variable costs are kept low. Fixed costs also fall on expanding unit volumes. These result in rising productivity which allows central banks to keep monetary policy loose and interest rates low as inflation stays contained.

The combination of improving credit fundamentals and easy money is glorious for credit spreads. The internal cash flows of companies are strong, which means they don’t need to borrow, and banks are flush with cash to lend. Both of these tend to drive down credit spreads. The orange circles in the graph above highlight these periods of low defaults and low credit spreads. Notably, there were no defaults at all in 1988-89, 1997 and 2006 when credit spreads were at their lows.

We do not believe that, in the words of impatient kids on a car ride, “we are not there yet” and still have some heavy weather to fly through for credit spreads. The credit crunch and banking crisis was a major blow to economic activity which still is working its way through the economy. There are economic dominoes still teetering and some will imminently fall. The fallout from the bankruptcies of General Motors and Chrysler is working its way through their suppliers. The reduction in their workforces will have knock on economic effects in service sector companies.

It is the prospect for defaults to increase with the economic weakness that suggests to us that the period of high credit spreads might last longer than in prior cycles. The sharp drop in credit spreads since February reflects the rescue of the banking sector by the worlds’ governments. This has substantially reduced the credit risk of financial issuers and has “taken off the Armageddon trade”. The equity and credit markets have rallied in response. The safety of government bonds has lost its allure as can be seen from the following chart. 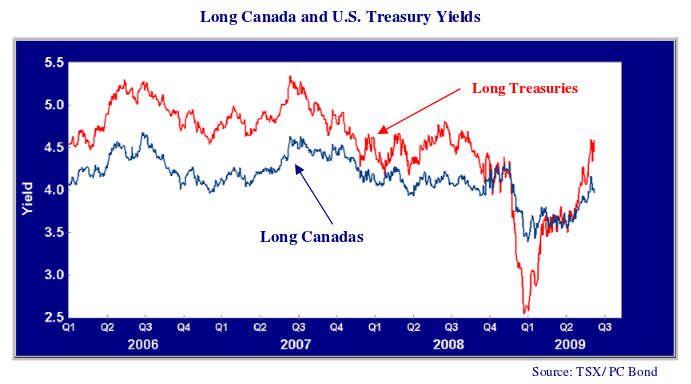 This chart shows the level of 30 year Canada and Treasury yields since 2006. The plunge in government bond yields in September 2008 coincides with the Lehman bankruptcy which caused bond investors to question their base belief that bank bonds were the safest form of corporate debt to hold. Long term Treasury yields fell from 4.2% before Lehman to 2.5% in late December as investors fled to the safety of government debt. Long term Canadas fell less, from 4.2% to 3.5%. This was a huge rally in government bond prices with long Treasuries up almost 20% and long Canadas up over 10%.

The reversal has been just as sharp, despite an announcement from the Fed that it would buy Treasuries in an effort to support the impending huge U.S. government issuance. Long Treasury yields have reached 4.6%, which is where they were in early 2006. Long Canadas are up over 4%.

This suggests to us that bond investors have discounted serious financial problems and are looking at the looming government supply worldwide. Central banks are holding short term administered interest rates down but the long end of the bond market is looking at forward at an improving economy and higher levels of inflation going forward.

We continue to like the prospects for Canadian corporate bonds at their still historically high spread level. The lessening of financial meltdown fears has been priced into corporate spreads but we believe that rising defaults will slow the pace of further spread narrowing. Long corporate spreads are still good value compared to historical levels and should provide further upside even given rising government yields.

There’s a lot of “catch up” going on in the corporate bond market at present. Bond managers who were underweighted in corporate bonds are scrambling to “get invested”. New issues are well oversubscribed and secondary spreads have plummeted with the hot new issue market.

We have been fully invested in corporate bonds since the fall of 2008. The thundering bond herd always waits too long to buy when corporate spreads are widening. There’s always lots of negatives to latch onto and safety is an easy sell clients. This was particularly the case with this cycle which saw the widest corporate bond yield spreads since the Great Depression. Once spreads begin to gap in, however, bond managers scramble to find bonds and dealers try to rebuild inventories. These feed into further spread narrowing which itself causes spreads to tighten further.

We believe that financial bonds are getting overvalued, especially compared to foreign financial and sovereign issuers. Success in corporate bonds for the next year will come from security selection as the easy money has already been made.