The bond market is currently seeing and sawing between statistical releases, waiting for evidence of the U.S. economy weakening. The consensus view is that weakness in the U.S. housing market will spill over into the general economy and cause the Fed to ease monetary policy and lower rates in 2007. Although the U.S. economy is slowing from the blistering pace of early 2006, strong statistics increasingly belie the consensus view. Employment has stayed high and wage growth continues. Even the housing market seems to be bouncing off its lows.

One major oversight in the “Weakening U.S.” consensus is the war footing of the U.S. economy. Although the Iraq War, Afghanistan and the War on Terror feature prominently on the political front, they are almost forgotten in economic and market analyses. Wars are good for economies, especially those financed by deficit, and the current defence spending of the U.S. government is no exception. A wide variety of industries support the U.S. military’s current campaigns and defence programs are notoriously cost insensitive.

The Yield Curve World is Flat

Our best guess is that economic growth will continue to slow in the U.S., before picking up well into 2007. This would mean that the Fed will be on hold for rates until resuming rate increases in late 2007 or into 2008. Given that many central banks are in tightening mode, including Europe, India and Japan, we think that money will become dearer as 2007 progresses.

Since the yield curve has already flattened and inverted at the short end, we think the result of continued economic growth could be a shift upwards in the yield curve. We also believe in the potential for a “bear steepening” of the yield curve (steeper yield curve with rising rates) as the potential for continued inflation above 2% is recognized. As bond investors’ hopes for a rate decrease are dashed, we think they will respond by demanding an increased inflation risk premium. This should put the peak rates for this cycle well above 5%, perhaps exceeding the 5.6% on the long U.S. Treasury that was achieved in the spring of 2006.

The corporate bond market was the place to be in 2006, as a benign default experience led to substantially lower risk premiums on corporate debt. This was exacerbated by the stretch for yield into collateralized debt structures which showed an amazing appetite for credit, especially leveraged loans and high yield bonds. The riskiest corporate bonds had the best returns in 2006, with the double digit returns on junk bonds far outpacing their investment grade cousins. The Canadian corporate bond market finished the year at 4.4% for the Scotia Capital Corporate Index which was 0.3% ahead of the SC Universe Index at 4.1%. 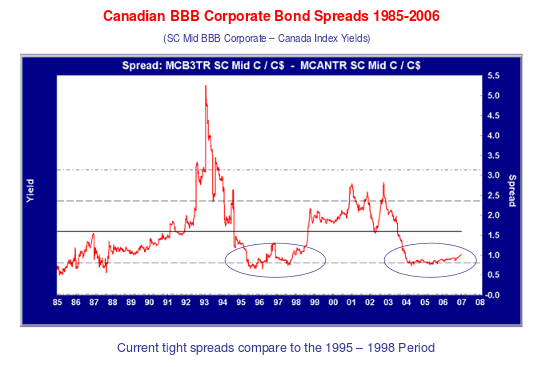 It takes some time for the credit cycle to peak, and this time is no exception. As the previous chart of Canadian mid-term corporate bond spreads shows, Canadian corporate bond spreads hit their lows in 2004 and have been gently rising in the past two years. The expansion phase of the economic cycle is characterized by benign credit conditions, loose monetary policy and an expanding economy. Tight spreads persisted from 1995 to 1998 followed by a widening trend to 2002. If history is our guide, 2007 should be the year for credit spreads to widen. This timing is confirmed by the current credit fundamentals, scarcer money and a slowing economy. Investor sentiment is on the side of wider spreads, as increasingly weak issues will increase the default rate over the next year or two.

The issues currently being shopped reflect the advanced stage of the credit cycle. We are seeing very speculative lending at present. An announced $8.3 billion LBO deal to take Aramark private in early January features a $3.7 billion “covenant lite” loan, $1.7 billion in bonds and $600 million in subordinated bonds as well as a $600 million, six-year revolving credit line and a $250 million letter of credit facility. The sponsors are putting up $1.8 billion, which will undoubtedly be refinanced when the markets permit.

For a summary of the deal’s merit, we turn to a report on the proposed deal by Bloomberg News. Neal Schweitzer, a senior vice president in corporate finance at Moody’s in New York said: “the size of the loan, considering the thin protection afforded by the structure, underlines the vast pool of market liquidity chasing this asset class” (Bloomberg News). Loosely translated, he’s saying that all the money out there is making investors stupid! Another credit analyst, William May, a senior director in credit market research at Fitch Ratings in New York said that investors were stupid in another way, stating that the deal “suggests that the borrower-friendly environment and robust liquidity of the past few years has not abated” (Bloomberg News).

The Force is Strong in this Cycle

As Darth Vader might put it, the (monetary) force is strong in this cycle. The immense monetary stimulation since 2000 means that we are now at very tight valuations for most credit products, reflecting the financial lust to invest that seems to have permeated every corner of the global financial markets. There is presently little reward in accepting credit risk.

Such immense speculation does not go unpunished by market forces. Loan losses will inevitably increase and corporate bond spreads will widen as the weak new issues of the past few years run into problems. As losses increase in portfolios, investors will stop funding speculative issuers that need new money to survive. A tightening in credit standards will follow and feed into the illiquidity of credit markets. As we pointed out earlier, the financial innovations that are lauded today will be rued as their increased leverage and market pricing add to the credit downturn.

Frankly, this is a refrain that we have been singing for some time. We are content, however, to wait out the culmination of this cycle from the higher quality sidelines, given the meager returns from assumption of substantial risks. While it is taking longer than we anticipated for corporate bonds to weaken and credit spreads to widen, the odds are against lower quality bonds.