The disastrous credit experience of financial institutions in late 2007 and early 2008 saw a black mood envelope the credit markets. The investment herd stampeded out of credit and into the safety of government bonds. Only the highest quality and most liquid government bonds would do, with Canada bonds outperforming even mortgage backed securities guaranteed by the Canadian government!

The first quarter was probably the bottom of the credit rout, as the Federal Reserve orchestrated its rescue of investment dealer Bear Stearns in mid March which lessened fears of a major financial institution melting down. The Fed also instituted a number of lending facilities for deposit taking banks which enabled them to exchange their duff securities for pristine Treasury Bonds. The Fed then extended its lending largesse to the investment dealers of Wall Street after the Bear Stearns incident. It was clear that the Fed would not permit a major swap and derivatives player to fail out of fear of a “knock on” effect.

With the Fed and its printing presses backing Wall Street, credit moved from the category of “Avoid” to “Possible”. At the time of writing in late May, bond investors have climbed out of their credit bomb shelters and are now even buying new issues! Secondary bond spreads have come in from their widest levels, which had reflected the sheer panic of investors. Happy credit days are not here again, but it’s a start!

International bond investors who relied on credit ratings had become hopelessly disoriented when they found that some of the AAA rated securities that they had bought from their Wall Street buddies were now trading at cents on the dollar. Canada did not escape the credit problems, with some Canadian banks and Asset Backed Commercial Paper investors showing world class credit stupidity in their portfolios. This panicked flight to quality made for a fascinating dichotomy over the first quarter. As the chart below shows, yields on Canadian corporate bonds (red line) stayed elevated as Canadian government yields (blue line) plunged. Since many bond investors were over weighted credit versus their benchmarks, this very negatively impacted their performance. These consensus bond managers became sellers of corporate issues into a declining market, increasing corporate yields, and provided a strong bid for government issues, which decreased yields on government issues. 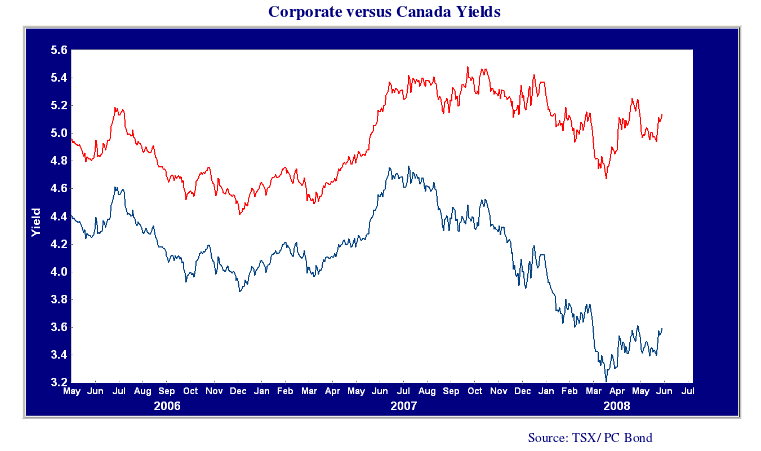 The Canadian corporate bond market did not escape the global bear market in credit. The lagging performance of corporate issues in the quarter put the 2.1% return of the Dex Corporate Index a full 2% behind the 4.1% return of the Dex Canada Index. Over 12 months, the Corporate Index return of 2.8% was a massive 5.6% behind the Canada Index. Interestingly, the Agency index which is comprised of bonds guaranteed by the Federal government underperformed the Canada index by .7% in the quarter and 1.5% for twelve months. This reflected the sheer terror of investors and their preference for liquidity at any cost. 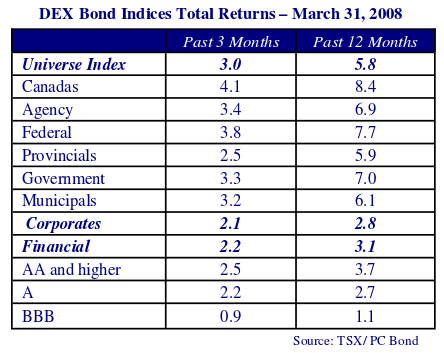 It looked to us that this was the most significant underperformance of the Corporate Index in our experience so we asked the good folks at PC Bond to run the numbers. The chart below is the rolling 12 month difference between the returns of the DEX Corporate and Federal indices since 1980. It shows that the Corporate Bond return averages .7% ahead of the Federal return and that our suspicion was correct. The -4.9% underperformance for the 12 months ending March 31st was the worst since Scotia McLeod (now DEX) started its corporate index in 1980. 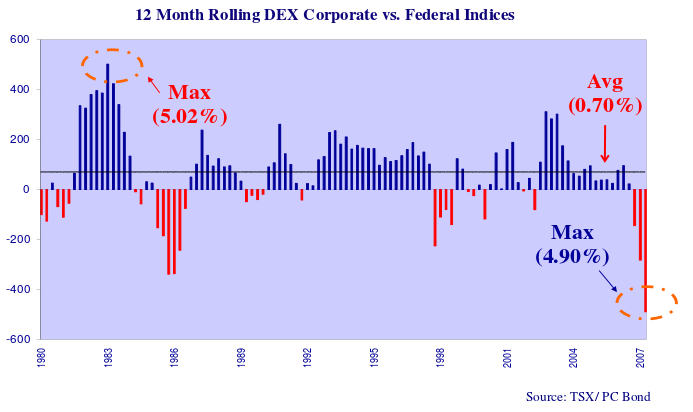 A Deluge of Financial Bonds

The underperformance of corporate bonds resulted both from investors fleeing into the safety of government issues and a veritable deluge of corporate bond issuance. Global financial institutions were forced into the new issue market to fund assets returning onto their balance sheets and to replenish their capital which had suffered from their massive credit losses. The quarter saw a succession of financial issues in Canada, with the issuance of deposit notes continuing to reflect Canadian bank funding requirements. This pushed deposit spreads to record levels with every new issue coming at a .2-.3% concession to secondary spread levels. On March 28th, BMO Financial came with a 10 year sub-debt issue at 270 bps which was a .3% concession to its existing issue. As the chart below shows, this was a full 100 bps wider than where its existing issue was trading at the end of February! By the end of May, as the panic subsided, this issue was back to 1.9% above government bonds which was close to where it had been trading in late February. 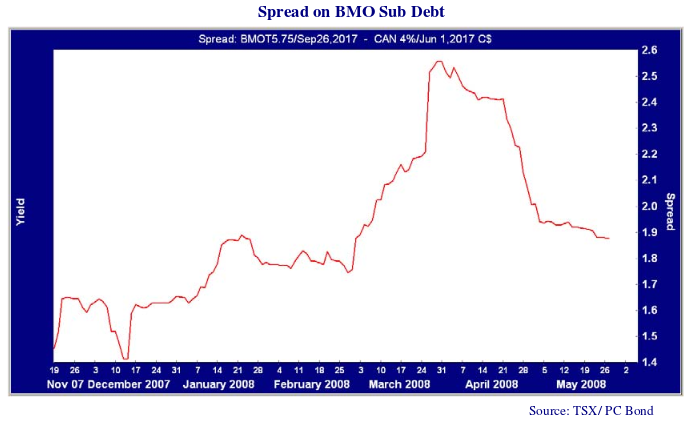 Foreign problems spilled over to the Canadian debt markets as Maple bonds reacted to widening spreads in the U.S. credit markets. The U.S. investment dealers with Maple issues were hard hit, especially Bear Stearns, as investors worried about the solvency of these issuers.

Sallie Mae, the major student loan issuer in the United States saw its unsecured debt issues rise in yield and drop in price as investors worried about its ability to fund without securitizations, changes to the Federal student loan program and its failed privatization. As the following chart shows, the spread on Sallie Mae had moved from .5% in early 2007 to 3% by the end of that year. The student loan funding fears moved the spread to well over 6% by the end of the first quarter.

We had owned Sallie Mae Maple bonds at Canso from early 2006 and had sold them in early 2007 because of our concerns over their stock futures purchase program and the changes to government student loan support and funding. As the fears grew, we updated our research and bought a position again at very wide yield spreads. Although the spread chart shows a peak of just over 7% in the Sallie Mae spread, we made a purchase at above a 10% spread as investors liquidated. Now that the U.S. Congress has moved to allow the Department of Education to buy federally guaranteed loans from the private student loan issuers and the worst of the credit crisis seems to have past, the spread has come back in to 5.6%. We think that with a dominant market share of 40% and liquidity returning to the credit markets, they will survive if not prosper. Clearly, buying bonds when others are selling is not a bad strategy in this case. 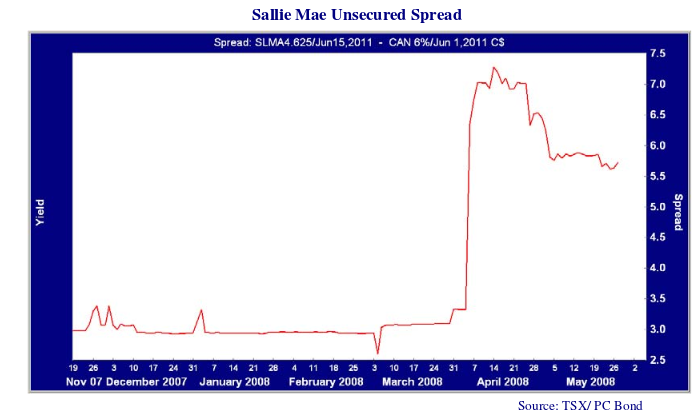 Although the worst seems to have passed for the credit markets, we think that spreads have remained at historically wide levels as can be seen in the chart below. Corporate bond spreads are as wide currently as they were during the severe recession of 1981-82. Yes, we expect a slowing economy and consumer credit losses to increase but we believe that these wide yield spreads are very attractive. The still wide yield spread on corporate issues reflects of the illiquidity of the current credit markets and the fears of bond investors and traders more than the credit fundamentals. Financial institutions are under capital pressure from their losses and funding requirements. This has translated into more expensive capital for their corporate trading desks and less willingness to hold inventories. The prominent dismissals of executives who presided over credit losses are object lessons for traders and risk managers. Risk aversion in financial institutions has also increased substantially and the recency of their large losses has overwhelmed their risk appetite. 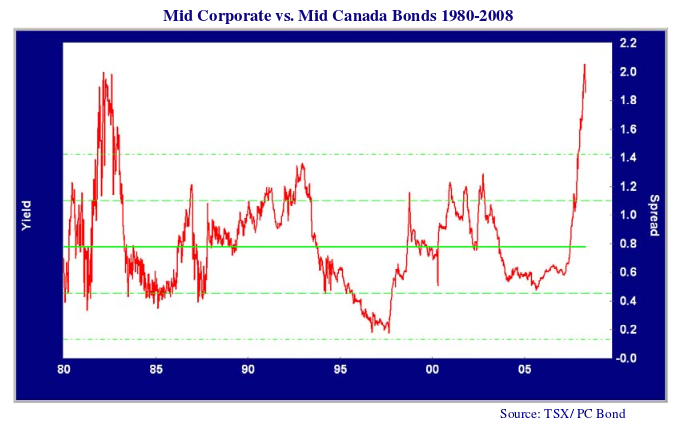 We believe that Canadian corporate bonds are good value at their current spreads. The liquidity provided by the Fed and other central banks through their monetary policy ease and special financing programs will further restore liquidity to reasonable levels. On the other hand, we believe that the credit crunch and the slowing economy will put non-financial issuers under stress.

We think that security selection is essential in the aftermath of this credit crunch. We are in what Dan Fuss of Loomis Sayles has called a “bond pickers” market. It will be important to distinguish between bonds that are value and bonds that have a deservedly low price. Fortunately, we are bond pickers. We see good hunting ahead!