The Federal Reserve continued its “measured” tightening of U.S. monetary policy with a .25% increase in the Fed Funds rate in both August and September. Alan Greenspan, the Chair of the Federal Reserve, had been quite positive in his comments on the economy over the summer. A strong and sustaining economic rebound left no lingering excuse for the admittedly “emergency” low levels of administered interest rates that were the legacy of the September 11th, 2001 terrorist attacks and the uncertainty in the prelude to the Iraq war.

The Fed’s press releases took care to point out that monetary policy remained accommodative but that it remained ever “vigilant” in its commitment to price stability. Local Fed Governors also continued the “normalization” theme with their comments on a reasonable level for short-term interest rates. To paraphrase: “much higher”. Clearly, Alan Greenspan does not want the financial markets to be surprised as in his 1994 tightening.

Just to prove that every generation of investors must learn its own lessons, the bond market rallied over the summer. Tighter monetary policy and much higher energy prices led to higher bond prices and lower yields. Making a mockery of formal economic education, the financial press came up with the ultimate perversion of economic orthodoxy: “BOND PRICES RISE DUE TO HIGHER OIL PRICES”. Yes indeed, oil at $50 a barrel has become the ultimate support for low interest rates due to its deflationary effect on consumer spending.

Perhaps higher energy prices and widespread commodity price increases might trouble those obsolescent investors trained and experienced in the dark ages before falling interest rates, but it clearly didn’t give pause to new millennium portfolio managers. Being simple folk, economically, we can’t really subscribe to this new age approach to the bond market. When the central banks tighten policy, there is less money available for financial investment and interest rates will rise.

We have believed for some time that the 1990s economic model has changed dramatically. In the 1990s, freer trade, particularly with mainland China, meant that the West exported its light manufacturing offshore. Cheap labour and unregulated commerce dramatically changed the terms of trade. China became the production division for most western economies “à la Wal-Mart”. This trend was and remains a strong deflationary force.

What is making a big difference now is the use of the U.S. dollar proceeds of the Chinese and other Asian exports. The Chinese and other exporters were content in the 1990s in investing their earnings in new plants, equipment and vast amounts of U.S. government bonds but now an increasing share is now being spent on domestic consumption. This has contributed to the strong upwards pressure on commodity prices. It has also caused a huge logistical bottleneck in ports on both sides of the Pacific.

The price of steel, oil and many other commodities is now reflecting large demand from China and other developing nations. This has been good for Canada, as a commodity and net energy exporter.

We do not see this changing anytime soon. The large foreign exchange reserves of China means there is little chance of a repeat of an Asian currency crisis as in 1998. A more likely risk is U.S. dollar weakness if the Asian exporters lose their interest in U.S. dollar investments. This would add to rising commodity prices in U.S. dollar terms and be very negative for the U.S. economy and inflation.

The renaissance of commodities is also changing the complexion of the financial markets. With commodities looking better than any time since the late 1980s, we are seeing a major rotation into commodity stocks and even commodity investment. Hedge funds are touting their ability to directly invest in commodities as an alternative to the traditional securities markets. Many major investment banks that had dramatically curtailed or even suspended their energy and oil trading operations are now moving heavily back into this area. This compares to the gasping technology sector, where the hope and enthusiasm of 2003 has disappeared into a desperate boredom.

We look for the economy to maintain its momentum until monetary policy begins to bite. This could be delayed well into 2005, when whoever is in the White House deals with the worsening situation in Iraq. The Fed will be loath to add economic setback to a very difficult political and military situation. Like the Federal Reserve during the Vietnam era, inflation fighting will take a back seat to the war on terror and in Iraq.

Strong commodity and energy prices have been positive for Canada. The strong Canadian resource base, particularly the energy sector, has put a strong bid under the Canadian dollar. This allowed the Bank of Canada to be more modest in its tightening policy, with a .25% increase in September. The Bank of Canada has had to temper its interest rate increases because of the rising Canadian dollar, despite its fears of keeping monetary policy too lax. The rising dollar has helped to moderate potential increases in Canadian inflation, as it has substantially lowered the costs of imported goods which are largely priced in U.S. dollar terms. Rising U.S. dollar commodity prices have also been moderated by the strong Canadian dollar appreciation.

The levitating act of the bond market is a worthy tribute to that master financial illusionist, Alan Greenspan. While all eyes were on oil prices reaching record highs and his monetary tightening high wire act, the rising bond market entered from off stage in a spectacular finale to the quarter.

It is hard to believe that the long end of the bond market rallied over 4% in a quarter when the Federal Reserve raised interest rates twice and oil prices hit a record $50 U.S. per barrel. Like the financial press, one finds it hard to explain using conventional economic and financial analysis. Being corporate bond specialists, we can be unsophisticated enough to attribute the bond market’s rally to “market spirits”. While this might seem a tad “technical” to the reader, it surely is better than the current vogue of market strategists and financial reporters that rising oil prices are deflationary!

Indeed, when everyone has adopted a unanimous view of the world, markets tend to confound by doing the exact opposite of market expectations. The resolve of investors is then tested by keeping them “offside” in their portfolios and performance until the pain of underperformance becomes unbearable. The turn in the market comes when enough of them throw in the towel for the market to reverse direction.

It seems to us that we are reaching this turning point. A recent Wall Street Journal article was devoted to the discomfort of portfolio managers and traders who called the economy and monetary policy correctly but who have had their portfolio heads handed to them by the strong rally in bond prices over the 3rd quarter of 2004. Many of these intrepid souls have been forced to take their bets off the table by organizational and career imperative. Wall Street traders have massively reduced their large short position in Treasuries and portfolio managers have extended duration and moved back into the now expensive mid sector or “belly” of the bond market. 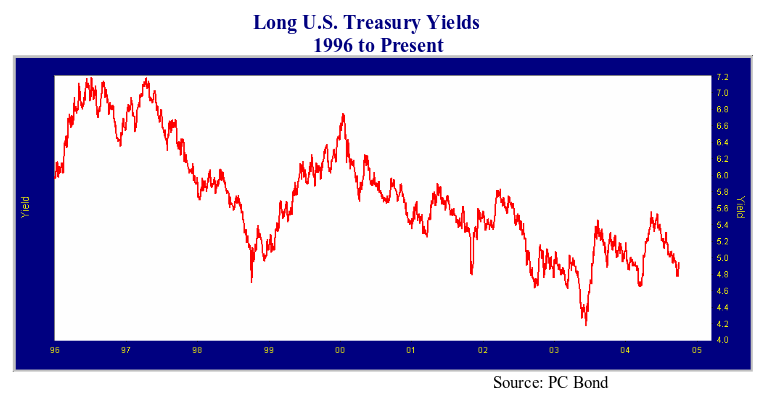 The rally in Treasuries and the consequent drop in U.S. 30 year mortgage rates led to increased Treasury buying by mortgage investors. We have commented in the past on this added momentum to interest rate movements. The graph above shows the higher lows and highs for bond yields since the bottom in June 2003. It also shows the volatility which we believe comes from mortgage hedging. It tends to accentuate the directional movement of interest rates, as we have seen in the recent bond rally. It will also add to the rise in yields when yields bottom out, as they now seem to be doing.

Scarcer money means higher yields. We look for mid and long-term bonds to rise in yield in the months ahead, as the reduction in money supply and higher short term interest rates reduce the necessity to invest in riskier and longer term securities.

Credit spreads are confused by the incipient monetary policy tightening, reflecting the tension between less available money and better credit fundamentals. While spreads have ceased to narrow and have begun to widen, corporate bonds still offer additional incentive to yield starved investors. The enthusiasm for popular new issues has continued, although the weakness in the equity markets seems to have spilled over some caution into the credit markets. We think that corporate bond spreads are very tight. Lower quality bonds do not pay sufficient compensation for potential credit losses in a weaker economy. This is a period to upgrade portfolio quality and to watch from the sidelines.