The second quarter of 2003 started with a moroseness that might have come from “Iraq Attack” let down or “Post Triumphal Stress” syndrome. No more televised retired generals, no more campaign maps, just boring and unexciting economic fundamentals. Muddled up or muddled down, the indicators really didn’t say too much. The sole pocket of economic excitement was relatively mainstream, residential real estate. What was a Wall or Bay Street market maven to do?

Luckily, Alan Greenspan was feeling somewhat left out after the war hysteria. The excitement of his knighthood long past, Sir Alan needed to refresh his image. What is an aging financial guru without his public? Seeking a return to the media spotlight, the Federal Reserve chair and his monetary shock troops decided that a frontal assault on the bond market would give Sir Alan back his fans, especially among a Bush Administration seeking re-election in just over a year.

Sir Alan and the Deflation Dragon

Deflation became the quixotic dragon for Sir Alan to slay. Like a mythical knight of old, Sir Alan didn’t have to wait for the dragon to actually appear. The Japanese kingdom to the east had seen the dragon’s ravages and its aging population had been under its thrall for many years. The specter was so horrible that the mere possibility of its appearance let Sir Alan prove his courage and honour to the financial markets.

His Round Table of area Fed Governors sallied forth with valiant and intrepid speeches on what Sir Alan would do to the deflation dragon, if it dared to show its head! With such a mythical beast to slay, Sir Alan would not just use the tools of an ordinary Federal Reserve chairman, he would have his magisters cook up new and bold central bank methods.

“Buy bonds! Buy stocks!” shouted Sir Alan’s Governors in their speeches on his response to deflation. If that proved insufficient, Sir Alan would buy loans and even asset-backed securities. No financial asset would be safe from the buying parties that sallied forth from the Fed’s redoubt. Sir Alan would give no quarter until the deflation dragon was slain, and the old King, inflation, was restored to its throne. “And the kingdom would live happily and prosper ever after.”

Of course, the ending to this monetary fairy tale is rather different from economic orthodoxy. Paul Volcker banished the inflation dragon in 1981, so why is Sir Alan now trying to bring it back? “Who cares?” is the consensus reply of the financial community. It is amazing how little talk there is among the economic chattering classes of this stunning reversal of policy. Economists and the markets have come a rather long way from their “zero-inflation” and price stability vogue of the late 1990s.

With few economic portents to react to, the bond markets glommed on to the deflation talk rather quickly. Very quickly, in fact, with U.S. interest rates plunging to levels not seen in 50 years. This caused a huge bonanza for the real estate markets and mortgage refinancing activity. Given the bizarre structure of the U.S. mortgage market, with most residential 25 year mortgages prepayable at any time with no penalty, it also caused a huge headache for the mortgage lending industry.

Homeowners rushed to lock in the low rates for their mortgage. Many homeowners had already refinanced once or twice in the past couple of years and now could reduce their interest rate even further. They could also borrow more for the same payment, and this caused a huge increase in mortgage lending activity. The offset was the holders of Mortgage Backed Securities who ended up with their money back at par, which caused huge reinvestment problems for these investors. Mortgage banks rushed to hedge their prepayment risk by buying treasury bonds. This caused the bond market to rally further, as interest rates fell even lower, which accentuated the steep drop in long-term interest rates.

Despite the plunging interest rates in the bond market, the equity markets wanted to rally and did so with a vengeance. In the quarter, the major market indices were up 5% to 10% and the more speculative NASDAQ index was up 21%. Indeed, much like their bond management brethren, equity managers seemed to be caught offside by the size and sharpness of the equity market rally.

This seemed to cause a head long rush into more speculative stocks, even the very names that led the bubble up and down in price. It seems that the only mistake worse than losing client money over the last three years is to miss the rally when it finally occurs. Since the developing equity market rally seemed potentially to be the real thing, managers could not stand to miss out on the action. It did not pay to be a bear on bonds or stocks in the second quarter of 2003.

Is Deflation Good for Both Markets?

Of course, one must ask the question: “how can the bond market and stock market both rally on deflation fears?” We cannot reconcile the two markets rallying together on economic outlook, but we think that the rallies reflected more returning market liquidity than underlying fundamentals.

The immense monetary stimulation from Sir Alan has provided investors with the near term courage to stop selling and we think that this has caused short covering by speculators. This combines with quantitative managers and hedge funds being strongly pro-cyclical in their market tactics to make for very fast and powerful market moves.

We look for a mixed economy in the months ahead, with slow improvement becoming evident. This could cause a severe upset in the bond markets, which needs deflation to justify current interest rate levels. With the Federal Reserve targeting 2% inflation, interest rates could easily rise if this becomes the reality with further economic strength.

Whether the Fed was actually concerned with deflation or wanted lower long-term bond yields, the result was the same, a sharp drop in yields and major turmoil in fixed income markets. Bond managers did their part to add to the bond market’s momentum. They were feeling quite exposed given their portfolio positioning.

Expecting a recovering economy and financial markets after the Iraq invasion, they had expected interest rates to rise with an economic recovery underway. This positioned them short of their term targets or in a defensive “barbell” portfolio, holding very short-term paper and long bonds. Then long bond prices rallied 8% in the month of May, as shown in the chart below. 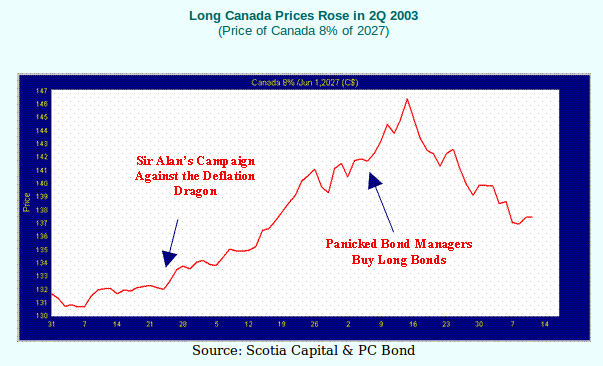 The market rally caught bearish managers very much offside in a quickly rising market. This forced many hands, as they were forced to buy long bonds in the so-called “pain trade”. The howls of anguish became very pronounced by early June when long-term bonds rose a further 5% in the first weeks of the month. Throwing in the towel and buying long bonds, many managers had their heads handed to them as the market fell from its peak and turned negative by the end of the month.

In the table below, we have plotted the course of long-term interest rates since 1992. The suddenness of the recent 2003 market move is reminiscent of the sharp increase in yields in 1994 that caught many market participants off guard. 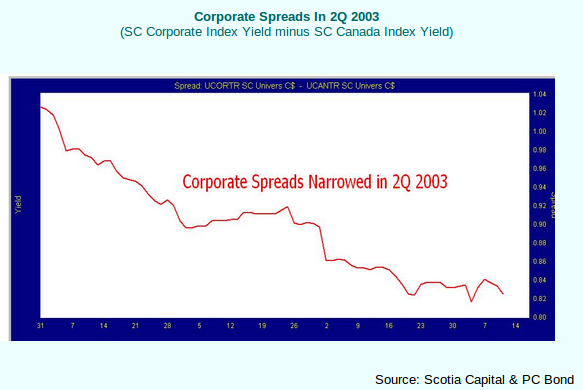 This created financial havoc in the nascent derivatives market, with the Orange County implosion a direct result of imprudent bets on interest rates. We believe we have yet to see the results of this latest interest rate shock, especially with its dire effects on the U.S. mortgage prepayment activity and the discount rate used by pension plans.

We look for yields to stabilize, and perhaps to move upwards if the economy improves measurably. There is a significant risk that the move upwards will be very fast, as in 1994, as investors are once again caught on the wrong side of the interest rate change. If and when long-term interest rates move upwards in the U.S., the mortgage prepayment activity will fall off quickly and the term of the huge holdings of U.S. residential MBS will extend dramatically. This will cause holders of MBS to sell bonds to hedge and otherwise shorten the duration of their portfolios.

The Canadian corporate bond market rallied in spreads in the quarter, as can be seen in the chart below. Bond managers stretching for elusive yield chased all new issues. A fine example was the Altalink financing, which refinanced the buyout of the TransAlta distribution system. The new issue was oversubscribed many times and investor fills were 10-15% of orders. The stretch for yield became almost absurd, with a BBB rated new issue CP Rail 10 year being priced at a spread of 91 bps over Canadas in late June and heavily oversubscribed.

The Column Trust CMBS (Commercial Mortgage Backed Security) financing for the perpetually troubled West Edmonton Mall was met with enthusiasm as well, with the junior tranche selling to retail investors. In our view, this structure has little advantage over a traditional mortgage bond and yet the spreads were very tight. Given the history of financial problems and impropriety with this property, it is amazing to us that this issue could be done at 90 bps, based on a low loan to value ratio and favourable credit ratings.

All the enthusiasm for new issue corporate bonds means that secondary traded issues saw significant spread tightening as well. We think that significant supply should develop into the fall, with issuers taking advantage of very low absolute interest rates to refinance outstanding higher coupon debt. This will be accelerated if interest rates move higher, as issuers and underwriters rush to lock in lower rates.

We think that corporate bonds are fully valued, with overvaluation of new issues being commonplace. Given the low absolute interest rate levels, corporate bonds could move to more expensive levels in the next few months as their relative coupon is still very attractive to income starved investors. We think that “off-the-run” issues still provide some value, as do unpopular issuers who have fallen substantially in credit rating. Long-term utility issuers that have fallen to the BBB rating category are still attractive, as investors with an A focus stage out of these names. The airline industry woes have caused the GTAA credit to widen substantially, which makes for a relatively attractive spread compared to other A rated issuers.

We find it hard to determine a clear economic direction, but our expectation is for a more grudging recovery. This should lead to higher interest rates, although the instability in the financial system could cause some very wild gyrations in interest rates and the bond market. Corporate bond spreads are not cheap, but they are not wildly expensive given the prospect for recovering corporate profits and the immense monetary stimulation by the world’s central banks.

This means that the financial markets will be very unsettled for the next few months, as investors try to discern which trend to jump onto. We will concentrate on the prospects for our issuers and the long-term valuation of their securities, which will not be easy given the financial tremors that we might see ahead. If corporate bond spreads continue to tighten, we can foresee trading up in quality and taking profits on fully valued positions. When we consider the CP Rail new issue at 91 bps, we are reminded of the spring of 1998, which saw a new issue of Cara Hospitality at 68 bps that now trades in the mid 200s. We are willing to accept risk when our portfolios are compensated for it, but we seem to be approaching a juncture when the potential return might not justify the risk.