A Greek Tragedy for the Markets

The ancient Greeks believed that tragic drama was good for the soul. The financial markets went through a Greek tragedy in the second quarter of 2010 but it was not cathartic for investors. Hidden Greek deficits and debts were taken in stride by the markets until February when it was disclosed that Goldman Sachs had structured derivative transactions to obfuscate their size. Regulators which had previously turned a blind eye to these machinations were of course outraged. The financial sector then came under pressure and regulatory pressure was stepped up on the evil doing investment banks. Financial stocks were hit again in April when it was announced that the SEC was charging Goldman with fraud over some CDO deals. This knocked the markets off their rallying trend and started a downwards move.

Things got worse with the “Flash Crash” on May 6th when computerized program trading overwhelmed the markets and stocks crashed. Some normally blue chip stocks traded at fractions of their prior value. Mindless programs hit bids that were far below previous market prices. The financial press, which had spent the previous year extolling the virtues of the economic and market recovery, now began to once again question all things financial.

The Alphabet of Recoveries

Financial skepticism has now replaced the previous consensus, which had fixated on the strength of the recovery, be it “V” or “U” shaped, with nary a thought to its sustainability. Market watchers seized on the government fiscal problems and lowered their economic forecasts due to the fiscal drag. This led to talk of “L” and “Hockey Stick” recoveries due to downgraded economic growth forecasts. Some economists also touted the dreaded “W” or “Double Dip” recession. The renewed financial hysteria also has proved a boon to the doomsayer camp, which spread its message of financial Armageddon with renewed vigour.

The increased fear of “double dip” recession and economic weakness hurt equities but benefited the bond market as yields fell. The DEX Universe Bond Index was up 2.9% for the second quarter of 2010. Canada government issues outperformed, returning 3.7% with long Canadas up 6.9%. The Corporate Index underperformed at 2.3% with increased spreads due to credit fears. The widened credit spreads on long issues were more than made up for by the drop in long overall long yields. Perversely, in a credit downturn, the DEX Long Corporate returned 4.2% for the quarter compared to 1.5% and 2.4% for the DEX Short and Mid Corporate.

Yield to Die From?

The Euro debt crisis that widened corporate bond spreads also killed the new issue frenzy in global credit markets. This has particularly impacted speculative issuers trying to take advantage of the “Die for Yield” rally in junk bonds. Many deals have been postponed and the “Made in Canada” high yield marketing pitch from Canadian investment dealers is now as popular as higher taxes.

This change in market tone is not unwelcome at Canso. As we said in April:

“We don’t really mind pro-cyclical and consensus investors bidding up the prices of our bonds, in fact we encourage it. On the other hand, as credit professionals, watching other bond managers snap up weak deals at very expensive prices is a tad dispiriting. The bid for corporate bonds is now so strong that investment dealers are back to their pre credit crisis trick of doling out corporate bonds like water in the Sahara.” Canso Corporate Bond Letter, April 2010

The corporate bond seller’s market has quickly morphed into a buyer’s market. We are now finding we have renewed negotiating and pricing power on new issues. This is good for our portfolios and clients. Issuers disdainful of suggestions from potential buyers are now desperate for enough interest to do a deal.

Spreads are at Recession Levels

Despite the angst over all things European, we think it is a good time to be buying corporate bonds. Corporate bond yield spreads are still at 1.5% over Canada bonds. This reflects recessionary levels as the chart below shows. 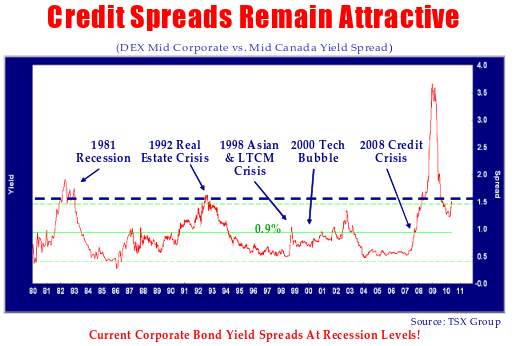 The current spread equals the level of corporate bond spreads in the severe recession of 1981 and the commercial real estate collapse of 1992. It is well above the spreads during the 1998 Asian Contagion and Long Term Capital Crisis and the 2000 Tech Bubble.

It is notable that the peak of the credit market (lowest credit spreads) occurs two to three years after the widest crisis spreads. This is a result of the lax monetary policy in this period as central banks attempt to repair the damage to bank balance sheets by money creation. Given the laxity of current monetary policy, it is very possible that we will attain these levels over the next year or two.

Given the attractive spreads in the corporate bond market, especially in long corporate bonds, we are still fully invested. We believe the need for financial income will continue to be strong, as reduced preference for equities and demographics shift both retail investor and pension funds towards fixed income. With government bond yields low by political dictate, the yield advantage of corporate issues means they are increasing as a percentage of portfolios.

Long corporate bonds continue to be excellent value in the Canadian corporate bond market, especially the P3 (Private Public Partnership) sector. The setbacks in the credit markets and a large deal pipeline have maintained these spreads at a very attractive level at about 3%. This is excellent value for these very well structured and secured offerings which are ultimately supported by governmental cash flows. We marvel that these excellent issues have been passed on by the mainstream. The spreads on these issues are comparable to some recent Canadian high yield issues with much higher credit risk. We have been a significant player in these issues for many years and have a dedicated pooled fund which targets these types of issuers, the Canso Corporate and Infrastructure Debt Fund.

We have participated in several recent issues for our client accounts. Other Canadian investors are now seeing the light. The recent $750 million McGill Health Centre transaction, sponsored by SNC Lavalin, attracted 45 investors compared to the typical 5-10. While we would prefer less participation in these private deals, the increased participation does increase our future trading opportunities.

Despite the fear in the markets and prominence of the financial doomsayers in the press, we are constructive on the credit markets. As we have said many times, even bankers can’t go bust with governments stuffing them full of cash and buying their bonds. The recent Euro debt crisis was a long term positive for the banking sector as financial reform initiatives gained extra momentum.

Despite the fact we toil in the financial markets, it has been our belief that much of the so-called “financial innovation” was ill-advised as we said many times in the years preceding the credit debacle. The current Secretary of the Treasury Geithner and Lawrence Summers, the chief economist to the Obama administration, were instrumental in the repeal of Glass Stegal which allowed much of the financial shenanigans to take place. They were a substantial obstacle to any real financial reform.

The Flash Crash renewed financial fears and gave Dr. Paul Volcker, the former Fed Chairman, and the reform camp the platform to be heard in Washington despite the best efforts of Wall Street interests to head off any real reform. It really is quite amazing that anyone can argue that the quantitative stupidity of Wall Street has any redeeming value after the Flash Crash. The reasons for it are still unknown after more than a month after stocks plunged on program trading for no apparent reason. Our question is why let the kids play with dynamite when they are always blowing us up?

The good news is that plain old yield spread is back in vogue and is likely to remain sought after. Stick with your corporate bonds and you won’t be disappointed!