Economists who are peering through their magnifying glasses in the hopes of detecting an economic slowing should now move their focus to wages. We had a bit of a bond market rally in July after the weak employment report for June which came in at much lower than expectations. This fed into consensus market opinion as a lower interest rate input and stoked the expectation that the Fed might curtail its interest rate increases. Skeptics, Canso included, were quite astounded by the accompanying wage growth numbers at 3.9% year-over-year.

In early August, we have just had another very strong wage growth indication. The U.S. Labor Department reported that labour costs increased at a faster than expected 4.2% for the quarter. Labour costs in the U.S. increased 3.2% over the last twelve months which, as Bloomberg reported (U.S. Economy: Productivity Slows, Labour Costs Climb, August 8th, 2006), is the highest increase since the fourth quarter of 2000 and compares to the average increase of 0.8% from 2000 to 2005. Since wages tend to track inflation, this should be a significant concern for the Federal Reserve.

Without delving into inflation theory too deeply, this reflects the fact that workers are seeking higher wages to keep up with price changes and that employers have the financial ability to increase wages. We believe that this is a significant change from the experience of the 1990s and reflects the aging work force in the United States and much of the developed world. Since it is very difficult to replace trained and effective staff, employers who have had trouble hiring workers to meet their needs are very reticent to risk losing them over a few percentage points in wages. Since the Fed has been very accommodative and the economy has been booming, employers are choosing to better compensate their employees rather than risk losing them.

We have only just recently seen market commentators grasp that a weakening economy does not necessarily mean lower inflation. This is very foreign to the current market consensus on the prospects for interest rates. This harkens back to the 1970s when “cost push” inflation was a familiar term to financial market participants. The hope that a slowing economy will lessen inflationary pressures seems a little naive to us. Market bulls trumpeted the de-linking of commodity prices and consumer price inflation as a new market paradigm on the way up for commodity prices. Why we ask, should it be any different on the way down for commodity prices?

Where are we going with this discussion? This far from benign inflation picture has major implications for the course of interest rates. Humans tend to use recent experience as their benchmark and investors are no exception. The absurdly low interest rates of 2001-2004 have lulled the markets into a false sense of security. The following chart shows that in 2000 we had interest rates above 6% with lower inflation than we currently have.

The pressure on Mr. Bernanke to be a “nice guy” on interest rates is immense. The ultra-low interest rate program of his predecessor, Alan Greenspan created incredible wealth for those who use debt and leverage. When there is essentially no charge for the use of capital the supply becomes limitless. Greenspan’s demeaning of capital benefited a wide variety of financial players ranging from hedge fund proprietors to American homeowners who rushed to borrow at negative real interest rates in their quest for capital appreciation. 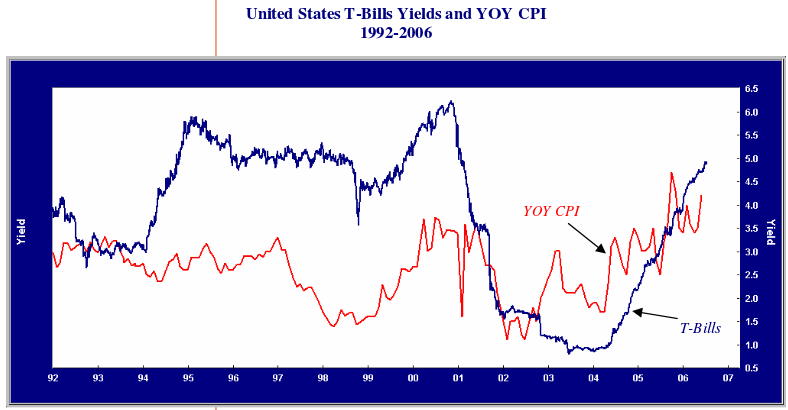 The financial markets are not prepared for slower growth and stubbornly high inflation. This is especially true in the bond market. It is only recently that a few market commentators and economists have forecasted interest rates approaching 6%. As we pointed out last quarter, the current level of real yields is low in the United States. If the face inflation rate settles in the 4% range, short-term interest rates in the United States at 5.25% are barely at a neutral level, if history is our guide.

The flat yield curve means that longer term interest rates are also historically low. The Fed’s recent pause of its interest rate increases at its August meeting means the economy should continue strong enough to cause long-term rates to rise. We think there is likely to be a “bear steepening” of the yield curve. This would see long-term interest rates rise as the bond market recognizes that inflation could be higher in the years ahead and an inflation risk premium is built into longer term bonds. If the Fed is then forced into further short-term interest rate increases, we believe that long-term rates would follow upwards continuing with a flattening yield curve until the economy weakens significantly.

The risk to our forecast is dramatic turmoil in the financial markets which could cause the Fed to enter into one of its patented “emergency” interest rate power dives. This is not a remote possibility given the extensive leverage in the financial system and the incredible speculation by hedge funds financed by their banking partners. As we have discussed in our previous reports, Alan Greenspan’s ultra low interest rate policies basically expropriated income from savers and transferred it to borrowers. This effectively removed the financial cost of capital and has encouraged all manner of risky investment behaviours. The current vogue for structured products, derivatives, private equity and hedge funds is proof positive of the massive market stretch for returns. The credit markets have not been immune to this financial promiscuity.

We were awestruck recently by an article recounting the cascading leverage employed by investors and their lenders in Collateralized Debt Obligations (CDOs). It seems that banks who lend to hedge funds that specialize in investing in the equity of CDOs are getting a little nervous. This has caused them to package these loans into securitized structures and sell them to hedge funds. The financing for these packaged CDO equity loans is provided by banks of course.

On the surface, this packaging and selling of risk seems to be a triumph of modern risk management. Digging a little deeper, this has got to be one of the dumbest investment programs of all time. Just consider that the original CDO is made up of corporate bonds and loans and that the “senior” tranches are rated AAA and AA because the 6-10% in equity bears all the default risk. An experienced loan loss on the CDO pool of 2% would equate to 20-30% at the equity level. Packaging the CDO equity into securitized structure means these loans could easily have a loss experience of 20-30% or higher!

Most probably, the Prime Bank lending against these securities is providing some sort of margin as well. They probably feel safe in their knowledge that they are “marking these to market” on a daily basis. Unfortunately, the market for CDO Equity Loan structures will probably not be that robust when the bank makes its margin call. The cascading leverage employed in this process is tremendous. A slight increase in experienced loan losses at the CDO pool level becomes magnified hugely at the Prime Bank who finances the loan securitization. Welcome to the wonderful world of modern investment where risk becomes a virtue.

On the credit front, we think that corporate bond spreads will continue to widen. Although the financial situation of companies is currently good and default rates are very low, credit spreads are forward looking and reflect monetary conditions. As the Fed’s higher rate regime begins to slow the economy and tighten credit conditions, which is its intent, corporate bond spreads will widen.

The widening of spreads should be exacerbated by the drop in demand for corporate bonds for CDO securitizations. The demand for corporate bonds for CDOs has been one of the significant drivers of corporate yield spread compression. As the absolute level of yields rise in the bond market and spreads widen further, the ability to fund CDOs economically will come under pressure as CDO equity loses its allure.

Once Every Four Years?

This October will be the eighth anniversary of the Long Term Capital crisis in October 1998. This November will be the fourth anniversary of the bottom of the corporate bond market in 2002. Spreads have already started to widen. Our intuition tells us that this fall could be the time of reckoning for this cycle in corporate bonds. At this time on the credit clock, our many years of experience are a definite liability.

When it comes to adding new and risky positions we are clearly at a disadvantage to the young and aggressive portfolio managers and traders who have yet to complete a full credit cycle and who might not be around for the next one. They are the cannon fodder for the coming downturn. They have yet to experience the price pain and shock that comes from taking a 50% haircut on a position there is no bid for.

With our weather eye turned to the approaching credit storm front, we have battened down the corporate bond hatches by raising quality throughout our portfolios. If the severity of the next credit downturn is commensurate with the credit stupidity we are now seeing, things could get downright ugly in the next year or two.